Despite a cool new phone, Palm faces big challenges ahead. 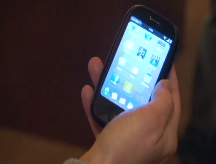 (Fortune Magazine) -- Before the iPhone or the BlackBerry Storm, there was the Treo, the original smartphone. When device maker Palm released the Treo 650 in 2004, early adopters gushed over it in much the way they now salivate over Apple's iPhone. But ask gadget heads what they think of Palm today, and the answer is likely to be, "I don't."

Palm has been fighting irrelevancy in recent years, and struggling; it lost $80 million in the past quarter alone. The Sunnyvale, Calif., company's latest gambit: an announcement in early January of a new operating system, dubbed webOS, and the Pre, a slick new phone with a touchscreen and a slide-out keyboard.

The hardware itself is winning raves, but software will decide Palm's fate. These days it isn't just a sexy form factor that draws high-end users; discerning consumers now want cool applications like Ocarina, which turns Apple's (AAPL, Fortune 500) iPhone into a digital flute, or Shazam, a tool to help identify songs.

When Palm (PALM) was the only game in town, it could cajole developers to create software for its devices. Today Palm has competition, and it falls woefully short on a few fronts. It has neither the openness of Google's (GOOG, Fortune 500) new Android platform nor the reach of the iPhone, which sold almost seven million units in its most recent quarter, vs. Palm's 599,000 smartphones. "You either make it easy for me, or you make sure I can reach the largest audience," says one mobile-software developer. Palm insists its webOS will be a cinch for developers, and executive chairman Jon Rubinstein says Palm is committed to the platform "for the next ten to 15 years."

One constituency that seems to like the new Palm: Wall Street. Palm stock soared more than 80% in the two full trading days following the product announcements, pushing investor Elevation Partners' likely 40% stake in the company up to $272 million. (Of course, that's shy of the $425 million the Bono-backed group has bet on Palm to date.)

But if Palm intends to thrive in smartphones, it needs to impress more than investors. It first needs to get back some of its mojo circa 2004 and make the tech world care about it once again.