The automaker's ambitious deal with Fiat sounds like a good long-term plan, but it won't solve its immediate problem - staying in business. 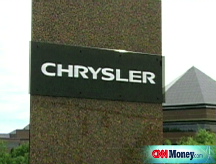 NEW YORK (Fortune) -- "Fiat Saves Chrysler" read the headline on one popular Detroit blog. At first glance, it seemed like a reasonable claim.

The Italian automaker has executed a successful turnaround and, once again, was looking for ways to broaden the distribution of its Fiat, Alfa Romeo, and Lancia brands. So it arranged a linkup with Chrysler to use Chrysler dealers to sell its cars in the U.S. Fiat's decision to take a 35% stake in Chrysler as part of the deal was viewed as a welcome vote of confidence from a respected competitor.

For Chrysler's part, the deal would give it access to Fiat's small cars and engine technology - a painless way to acquire some heft in fighting the global auto wars. And Chrysler too, would be able broaden the distribution of its products overseas by selling Jeeps and minivans through Fiat dealers.

The best part of the deal is that it gives Chrysler extra stature as it goes back for another $3 billion in federal aid, says Kimberly Rodriguez, an automotive consultant at Grant Thornton. And it represents a smart use of Chrysler's assets. "In an absence of cash, they resorted to the barter system with Fiat," she added. "They traded what they had."

But a second look at the term sheet makes clear that the deal does nothing to solve Chrysler's immediate problem - staying solvent through this horrendous market downturn.

First of all, Fiat paid nothing for 35% of Chrysler's equity. So Chrysler gave away more than a third of itself for free. If one-third of Chrysler is worthless, what are three-thirds worth? And what does that say to Congressional representatives contemplating future government aid?

Second, several years will go by before either company can make use of each other's facilities. Fiat's products are built to European standards, not American ones. Reengineering them for U.S. buyers will take a year or more and cost hundreds of millions of dollars. That won't help Chrysler in 2009 or even in 2010.

Such reengineering is also fraught with peril. The Fiat 500, a subcompact the size of a Smart, sure may be cute, but lots of work will be required to make it saleable here. In the process, its price may climb from $13,000 to $20,000 if Chrysler is to make a profit on it. The 500 won't look as cute then.

Worst of all, the Fiat alliance all but eliminates the possibility that another well-heeled company with spare cash might throw Chrysler a lifeline. Chrysler is now 19% owned by Daimler and 35% by Fiat. (The remainder is owned by Cerberus Capital Management). It is difficult to imagine a third automaker wanting another piece.

That likely means an end to hopes that Chrysler would eventually wind up with a different partner. "A linkup with Renault-Nissan would have made more sense," says Rodriguez. The Franco-Japanese company has strong positions in both Europe and Asia, and its alliance structure could have been expanded to include Chrysler without little fuss.

In addition, the Fiat linkup presumably eliminates the possibility of Chrysler selling off additional pieces of itself. That would mean taking the Dodge Viper and Chrysler PT Cruiser. Fiat won't want to maintain a partnership with a company that is getting rid of its most profitable assets.

Only a decade ago, Chrysler, riding high with trucks, Jeeps, and minivans, sold itself to Daimler-Benz at the top of the market. The deal turned out to be a disaster because Daimler didn't know what to do with it.

Back then, a linkup with a company like Fiat, with its expertise in diesel engines, luxury brands and small cars would have made sense. Unlike with Daimler, the two companies were of similar size and might have found a way to coexist. Chrysler then would have had the time and resources to develop a plan for its long-term survival.

Unfortunately, it has neither time nor resources today.

In a perfect world, Chrysler would be planning for next month, not next decade. Any payoff from the Fiat deal will only come long after the current crisis has passed.

Clock is ticking for GM and Chrysler