Parsons takes over as Citi chairman

The former Time Warner CEO has the unenviable task of trying to fix the troubled financial titan. 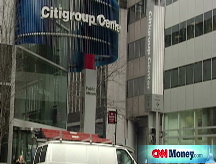 NEW YORK (Fortune) -- Citigroup, the struggling financial titan that recently announced plans to split in two, is shaking up its board again.

Parsons, who was chairman and CEO of Time Warner (TWX, Fortune 500) earlier this decade, after its troubled merger with AOL, and until recently was Citi's (C, Fortune 500) lead director, will succeed Sir Win Bischoff. Parsons was also previously CEO of the New York-based thrift Dime Bancorp. (Time Warner is the parent company of CNNMoney.com and Fortune.)

The news comes just days after Citi, which has received some $350 billion in federal capital and loan guarantees over the past six months, announced a $8.3 billion fourth-quarter loss and set plans to separate its core banking business from some risky assets and other operations.

According to news reports, regulators have been pressing Citi to shake up its board in the wake of billions of dollars of losses over the past 18 months.

"I look forward to continuing to work with the board and management of Citi in my new capacity as we continue to strengthen the company's core franchise and build value for our shareholders," Parsons said in a statement released after the market closed Wednesday.

The shakeup gives CEO Vikram Pandit a new partner atop Citi, whose stock has come under renewed pressure this week as investors worry about the bank's exposure to rising credit costs and the prospect of yet another round of federal aid.

Even after a 31% rally Wednesday, Citi's market capitalization is just $20 billion - a mere fraction of the value the institution held only a year ago.

"With his proven record of turning around Dime Bancorp and Time Warner, as well as his work with a wide range of government regulators, Dick is uniquely qualified to lead the Citi board and help guide the company's strategic corporate realignment into two distinct operating units," said Pandit in the statement.

Pandit took the reins at Citi at the end of 2007, after the board ousted Chuck Prince, the lawyer-turned-CEO who oversaw Citi's disastrous foray into mortgage-backed securities dealing. Citi has taken writedowns and credit losses of more than $70 billion since the market for risky debt collapsed in late 2007.

Bischoff, who served as interim CEO for the month between Prince's November 2007 ouster and Pandit's arrival, won't stand for re-election to Citi's board at its next annual meeting. He will retire from Citi later this year, the company said.

The departure of Bischoff, who joined Citi in 2000 and had served as the chairman since Pandit came aboard, isn't the only recent change on Citi's board.

Robert Rubin, the former Goldman Sachs exec and government official who had been a high-profile member of Citi's board since 1999, announced Jan. 9 he would retire from Citi.

Rubin was highly regarded as former President Bill Clinton's Treasury secretary, but was widely criticized over the past two years for his failure to take action as Citi found itself sinking into a swamp of subprime-related losses.

Rubin told Fortune's Carol Loomis in 2007 he wasn't responsible for the company's trading problems because he had what he called "this side role" - though critics note he took home $115 million over the course of a decade for his work on Citi's executive committee and other duties.

Parsons had hinted at a continued shakeup last Friday, when Citi announced its latest quarterly loss and breakup plans.

"The Citigroup Board of Directors is committed to strong, independent corporate governance at all times, but especially in the challenging conditions we face today," he said in a statement last week. "There has been one announced departure from the Board. Together with other anticipated departures, this gives us the opportunity to reconstitute the Board and we will do so as quickly as possible."

Citi shares rose 9 cents in after-hours trading Wednesday to $3.76. Shares are 87% below their year-ago high.

Rubin on the job he never wanted