Does the combination that was proposed a year ago still make sense? Did it ever? 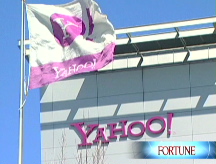 NEW YORK (Fortune) -- "I didn't come here to sell the company." That was the answer Carol Bartz gave at her first earnings presentation since being installed two weeks ago as Yahoo CEO. "I am here because I see a tremendous collection of assets, and because I want to help make Yahoo stronger." But when addressing the question whether she would sell the Internet company's search business, Bartz did not offer the same emphatic, "no."

What she did do is extol the strengths of Yahoo's No. 2-positioned search business, which Microsoft has shown repeated interest in buying. If anything, Bartz was making it known that Yahoo search is an asset that is increasing in value, not declining, and any would-be acquirers won't be picking it up for scraps.

Bartz appeared the no-nonsense, steady-at-the-helm leader that everyone has been looking for to save Yahoo. She made it clear she was still navigating her way through the company, seeing what its strengths and weaknesses are before laying out her roadmap for recovery.

"What I am most concerned about is this organization is very complex, and therefore it is hard for people to get speedy answers and be able to make decisions," Bartz says. "That is fairly easy to fix. I say fairly, because anytime you are moving people around it takes a little while for them to settle down. There are some really smart people here - they just need a little help in improving their liens of communication and channels. The good news is, I happen to be pretty good at that stuff."

It is conventional wisdom in tech circles that Microsoft and Yahoo will resuscitate talks about combining at least some parts of their businesses now that Bartz is CEO.

"I think there's a 100% chance they'll have meaningful conversations," says Tom Wilde, CEO of video search company Everyzing. "In terms of something meaningful actually happening, I would put that at about 70%."

Microsoft, you'll recall, a year ago offered to buy Yahoo outright for $45 billion or $31 a share, a staggering 62% premium to Yahoo's stock price at the time. Yahoo's shares today trade at about $11 a share. Yahoo (YHOO, Fortune 500), to the surprise and consternation of many shareholders, spurned the Microsoft bid. Microsoft (MSFT, Fortune 500) later sought to acquire Yahoo's search business, to no avail.

But does a Microsoft-Yahoo tie-up still make sense? A lot has changed in the year since Microsoft CEO Steve Ballmer released his letter to Yahoo's then-CEO Jerry Yang, suggesting that "together, Microsoft and Yahoo! can offer a credible alternative for consumers, advertisers, and publishers." Here's a quick look at some of the reasons the companies sought to get together back then, and whether the rationales still make sense.

Reason No. 1: A chance to catch a growth wave

In the months since Ballmer made his remarks, online advertising has taken a big hit. The Wall Street Journal, citing statistic from ad firm Efficient Frontier, recently reported that spending on search advertising spending fell 8% in the fourth quarter of 2008 from the same period in 2007.

Clearly the recession isn't helping any media outlets. But when the economy bounces back, will online advertising continue to take share from traditional media? "I know the recession has blown all estimates out of the water, but I don't think the secular growth thesis has changed, and I don't think the thesis would have changed for Microsoft," Mahaney says. If Microsoft still believes in the growth of the online ad market, it seems likely the company would look to strike a deal.

Microsoft and Yahoo both are insanely jealous of Google (GOOG, Fortune 500), which came from behind to dominate the search ad business (it has about 75% market share compared to Yahoo's 20% and Microsoft's 5%). It also has done a good job of garnering consumer mindshare in some other businesses that Microsoft and Yahoo consider core, such as e-mail.

Google continues to give Microsoft and Yahoo agita. Microsoft last week reported flat online revenue and a loss of $471 million for the unit - and said it would lay off some 5,000 people. Yahoo is set to announce earnings this week, and analysts expect ad revenue from big marketers such as auto makers to hurt its results. Google, meanwhile, keeps rolling along, posting an 18% gain in fourth-quarter revenue last week. (Profits fell because it had to write down bad investments.)

Yahoo, of course, tried the if-you-can't-beat-'em approach last year when it attempted to forge an advertising partnership with Google. Antitrust concerns scuttled the deal, and left Yahoo without a turnaround strategy- and, having rebuffed Microsoft, without a partner.

Is Google unstoppable? Of course not. Online marketers actually want Google to have strong competition. Thus far, neither Microsoft nor Yahoo have been able to put up much of a fight in search advertising on their own, and skeptics question whether putting these two wounded players together would result in a venture strong enough to take on Google. But if Microsoft and Yahoo are filled with enough Google envy, they might just be able to come up with a strong enough product to compete with their rival.

A few people close to Yahoo have suggested that the company should have taken Microsoft's original offer because it would have solved Yahoo's management problems. And these folks weren't just talking about Yahoo co-founder and former CEO Jerry Yang, who didn't exactly endear himself to outside shareholders. Yahoo has always struggled to find ways to make employees and executives accountable for their projects; Yahoo could probably have learned a thing or two about execution from Microsoft.

No matter what Bartz decides to do, there is one wild card in Yahoo's deck, and that's Yang. Though he announced his departure in mid-November, clearing the way for the board to find his replacement, Yang remains a very large shareholder of the company, and also sits on the board of directors.

If Yahoo decides to pursue some sort of deal with Microsoft, management will still have to sell Yang on the idea. He didn't seem to like the idea very much the last go around. If Yang has in any way warmed (or acquiesced) to the idea of a deal, that may be the biggest change to occur since Microsoft approached Yahoo a year ago.