AT&T looks to sell mini-laptops, bundled with wireless data contracts, for prices like $99 or less. Is the gambit brilliant or foolhardy? 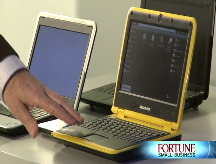 (Fortune) -- Glenn Lurie knows Silicon Valley better than most telecom industry types. As AT&T's point man on the iPhone, he was the guy who camped out in Cupertino and hashed out the blockbuster iPhone launch with Apple. The next big game in his sights? The netbook.

That's right, the netbook, that shrunken, low-priced laptop that lately has been a rare bright spot in the moribund PC industry. To hear Lurie tell it, AT&T's next hit phone might not be a phone at all, but a netbook with built-in Internet access that works anywhere you can get a cell signal.

Get ready for the clincher: Sign up for a two-year contract, and you might get your new PC for $99 or less.

The upshot is that the "free phone" phenomenon that helped make handsets ubiquitous in the U.S. isn't just for phones anymore. The first signs of change came this past holiday season when, working with AT&T (T, Fortune 500), Radio Shack offered a $99 deal on an Acer netbook, a promotion that went "extremely well," Lurie says. "That Acer one's a great example of how partnerships are going to work. That was Radio Shack coming to us saying, 'We've got an idea. Can you help us?' "

As president of AT&T's new Emerging Devices division, Lurie hopes to do a lot more of those deals. His mission is to get just about everything except phones connected to AT&T's broadband network -- laptops, GPS devices, cars, games, medical equipment, "all the way to dog collars," he quips.

It's only January, but he's off to a fast start. At the annual Consumer Electronics Show gadgetfest earlier this month, Lurie teamed with Sony (SNE) and Dell (DELL, Fortune 500) to announce that a new Sony camera will use AT&T's wireless network to automatically upload photos, and Dell will discount its $449 Inspiron Mini 9 netbook to $99 when buyers sign up for an AT&T data plan. (Of course, there's a catch: The price gets to $99 only after a $349 mail-in rebate, so you've got to front the money and trust the fickle Rebate Fairy to follow through.)

Why is AT&T helping to fund netbook discounts? Well, such deals have already proven popular in Europe and Asia, and U.S. carriers are looking for effective ways to lock customers into data contracts. Even in this tough economy, carriers are spending billions to boost their network speeds and out-duel the competition. But the carriers know bragging rights to the fastest data connection aren't worth much unless customers actually sign up. They have a hunch that cheap netbooks will get customers to commit to two-year data plans, just like free phones did for voice.

The plan could backfire. AT&T doesn't know yet whether netbook users will prove to be as loyal (and profitable) as, say, iPhone users. If they're not, the discounts could turn out to be a waste of money. And there's certainly no guaranteed that even the lure of a cheap netbook will get the masses to increase their monthly phone bills in the midst of a punishing recession.

But the titans of the PC industry certainly seem to be rooting for the idea of signing on with carriers. Kevin Frost, who runs the consumer notebook division for Hewlett-Packard (HPQ, Fortune 500), said last year that part of the company's vision is to make laptops as ubiquitous as cell phones, and working with folks like AT&T fits in perfectly.

What about Apple (AAPL, Fortune 500)? Lurie won't offer specifics of course, but during our chat he mentions that he just sat down with Apple Chief Operating Officer Tim Cook a few minutes earlier. Will AT&T ever sell a discounted MacBook? "We're having conversations with lots of folks," Lurie says. "I would very much like to do more business with Apple, and hope that we do."

Giving Intel and AMD a run for their money