Cisco goes - what else? - green

An update to an operating system lets customers regulate energy use. 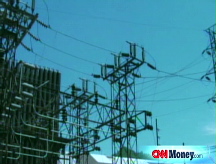 NEW YORK (Fortune) -- Silicon Valley powerhouse Cisco became the latest tech company to jump on the green bandwagon this week, with the announcement Tuesday of its new EnergyWise technology. Simply put, EnergyWise is a free update to IOS, the operating system for the company's ubiquitous Catalyst switches, that enables customers to monitor and regulate energy consumption of any device connected to the network.

According to the company, 300 engineers across various departments have been working on development - funded by Cisco's (CSCO, Fortune 500) $5 billion annual R&D budget - over the last three and a half years.

"Information technology is responsible for 2% of greenhouse gases. Our vision is to use the network to affect the other 98%," says Laura Ipsen, senior vice president of public policy and government affairs. "A lot of us in the IT world think about always-on. But we want to go from always-on to always-available."

The technology platform is rolling out in three stages over the course of the next year, starting with data capture of devices powered directly over Ethernet, such as the almost 80 million IP phones currently in use. "In the first phase, this technology will allow us to assess what's connected to the network and how much power everything is drawing. Once you know what's using what, you can provide rules," says Marie Hatter, a marketing vice president in Cisco's network systems group. "If I run a retail store that's open from 9 to 9, then I want to turn off everything from 10 p.m. to 8 a.m. the next day."

Step two, coming this summer, will involve monitoring network-connected devices that draw power from the electricity grid, like PCs, thanks to a partnership with IT power management company Verdiem, which is writing programs to the EnergyWise API. The third stage, to be introduced next year with the help of utility management firm Schneider Electric, will be building automation control. Buildings - because of the energy demand associated with powering, heating, cooling, and lighting - represent one of the greatest single contributors to greenhouse gases. The good news is that most are connected to the network by now.

Ipson cites several reasons for deploying EnergyWise. Of course Cisco is trying to be a good corporate citizen while trying to save customers money in the midst of a severe recession. But it's also looking for ways to expand its business - as evidenced by its recently announced forays into the server market. The company sees an opportunity in the coming boom in smart grids.

"Smart grid implementation will be accelerated by so many governments creating economic stimulus plans to spur innovation in utilities," she says. "Eleven billion dollars is the target in Obama administration. This is good for the environment and for reducing the costs of our customers. It's green on green."