The online retailer hits the street with a two-fold gift for investors: a great quarter and a share price to match. 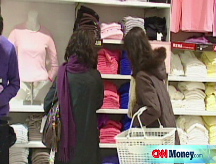 SAN FRANCISCO (Fortune) -- Finally some good news, brought to you by Jeff Bezos and the gang at Amazon.com.

In a week when company after company announced horrible earnings and pulled the plug on tens of thousands of jobs, Amazon's fourth-quarter net profit rose 9 percent, to $225 million, or 52 cents a share, in the quarter ending December 31. Overall revenue jumped 18% (the Street was looking for 13%).

Those are good numbers by any measure, but in the context of total online retail sales down 3% over the holidays, according to ComScore, and overall retail down 5% during the same period, according to the Commerce Department - they're stunning.

A big part of the story for Amazon appears to be international growth. While net sales for categories like media (books, DVDs and the like) in the U.S. slowed to a 7% rise versus 31% a year ago, international was on fire.

Excluding the effects of exchange rates, Amazon's fourth-quarter net sales from sites in the U.K., Germany, Japan, France and China climbed 31%, slightly down compared to the 35% growth during the same period last year.

"But based on everything we know about the global economy," says Thomas Weisel Partners retail analyst Matt Nemer, "That is downright shocking."

Bezos is cagey about the future direction of his business, and he wouldn't say which countries and which categories Amazon might tackle next. "Internationally we focus on the same things that we focus on in North America," he said during a conference call.

According to Bezos, those are great pricing and a great customer experience. The Internet giant's continued focus on those two areas was a refrain repeated by both Bezos and Amazon CFO Tom Szkutak throughout the earnings call. Pressure on margins was apparent, as Amazon lowered prices to keep shoppers coming, but not as bad as analysts had feared.

In general, neither Bezos or Szkutak gave away much, dodging questions about the specifics of Kindle sales, the impact of defunct competitors like Circuit City and just what Amazon might spend some of its $3.7 billion in cash on. Bezos didn't even hint at the launch of its second-generation e-reader Kindle 2, widely expected to be revealed February 9th.

Investors warmed to what they heard. Amazon (AMZN, Fortune 500) stock rose about 18% Friday in early trading, just north of $59.

Had Bezos ventured full-year guidance he could have instilled enough confidence in investors to take the plunge at $59 or more. Without it, too much uncertainty remains to send the stock appreciably higher.

"The problem is, in a tough economy Amazon doesn't get a lot of margin for error," says Nemer, who has a "hold" rating on Amazon. "You can't take away what they have done, but if they have a blip the other way, stocks trading at 36 times can get hurt."

Of course, if Amazon keeps nailing its quarters (and not just sand-bagging them as they seem to be inclined to) $59 could start to look pretty cheap.