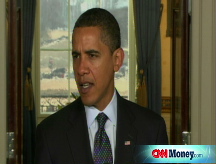 But pay caps alone won't fill the accountability deficit that has fueled runaway executive compensation and other corporate excesses.

Obama unveiled the plan - which would prohibit firms getting emergency aid from paying top execs more than $500,000 annually in cash - at the White House Wednesday morning. He did so as legislators, incensed by reports of rich pay and outlandish perks at firms that would have collapsed without taxpayer help, have been demanding action.

But while the Obama approach may bring some financial industry salaries down from the stratosphere, skeptics say it doesn't go far enough. What's more, they say, compensation limits don't address the festering accountability problem behind surging executive pay and the recent collapse of the financial sector.

"This plan doesn't look very meaningful," said Simon Johnson, a former chief economist at the International Monetary Fund who is now a professor at MIT's Sloan School of Management. "The issue at these companies is the lack of effective owners, and things like pay limits don't change that."

A common problem at companies that have received emergency aid from the government - from financial firms like AIG (AIG, Fortune 500), Bank of America (BAC, Fortune 500) and Citigroup (C, Fortune 500), or automakers such as GM (GM, Fortune 500) - is that corporate boards failed to guide or rein in management, Johnson said.

That's the case because the boards were more responsive to management than to their true masters, the shareholders - which now include taxpayers.

"Executive pay has been a symptom of a much broader problem," said Richard Ferlauto, the director of corporate governance and pension investment at AFSCME, the biggest U.S. union for public employees and health care workers. "You've had weak boards and out-of-touch leaders, and what you've gotten for it is a banking business model that imploded."

Ferlauto's union has been among the most forceful advocates of "say on pay," the nonbinding shareholder votes that give investors a voice on whether companies are paying their execs too much.

The Obama plan would force firms receiving emergency aid to conduct such votes, and would permit some recipients of other funds to skirt the $500,000 annual cash pay cap by holding such a vote.

But if the idea is to pressure CEOs into cutting their own salaries, count Ferlauto as a skeptic.

"I don't think you can rely on shame," he said.

Ferlauto stresses that attaching strings to federal funds are only the beginning of what must be far-reaching corporate governance reform.

"You can't do reform in a piecemeal process," he said. "Shareholders should be treated no differently from taxpayers. The perverse pay incentives we have in this country need to be turned on their head."

Some of the new rules lack teeth

There are also those who question whether the government's good intentions will translate into useful policy.

For instance, the Obama plan expands the number of executives subject to so-called clawback restrictions, which would force them to repay the company if they're found to have knowingly engaged in financial misstatements, from five to twenty-five.

But Gary Lutin, a former investment banker who runs the Shareholder Forum investor advocacy group in New York, said this provision is rendered largely moot by the need to prove an executive guilty of criminal conduct before recovering any funds.

He also questions the wisdom of a provision that would force corporate boards to define a company policy "relating to approval of luxury expenditures."

While the clause likely came into existence thanks to the freewheeling office redecorating of former Merrill Lynch chief John Thain - he spent $87,000 on a rug and $35,000 on a toilet when joining Merrill at the end of 2007 - Lutin said the act of piling on restriction after restriction only feeds the lawyerly mentality that has made many corporate directors so ineffectual.

"Putting a cap on pay or requiring board approval of luxury wastebaskets may help get a politician elected," said Lutin. "But what really matters is basic responsibility - so it doesn't do any good if executives can simply relabel their bonuses as 'retention incentives' or persuade the board the wastebasket will enhance corporate prestige."

Johnson, the MIT professor who writes on the financial crisis at his Baseline Scenario blog, said a better approach for Obama would have been to set pay at firms receiving emergency aid even lower - say, on par with the civil service pay scale.

That way, he said, skilled employees would leave to work elsewhere in finance or hang out their own shingles, and less skilled workers would find a new vocation. The ultimate goal, he said, should be to create incentives that lead to the orderly breakup of the dysfunctional giant financial firms.

"They don't get restricted stock in the civil service," said Johnson. "Why should they get it at these failing banks?"

Big bank execs: What they make

Meredith Whitney to banks: deal with it

For BofA, nothing fair about Merrill deal
Related Articles