Greenberg gears up for battle with AIG

A court fight may decide whether a pot of shares once worth more than $20 billion goes to AIG or the former chairman's charity. 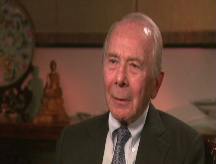 That's the question at the heart of a case slated for trial next month in New York federal court that pits the once-mighty insurance giant against the man who ran it for nearly four decades.

Greenberg was forced out of AIG in 2005 amid a wide-ranging probe into the company's accounting by former New York Attorney General Eliot Spitzer. But Greenberg managed to retain control of a sister company known as Starr International Co. (SICO), which holds hundreds of millions of AIG shares. It's the ownership of those shares that are in dispute.

The trial will spotlight the bitterness between the 83-year old ex-billionaire and the company that once brought him those riches. Four years after his departure, the two sides continue to fight over shares that were worth more than $20 billion around the time Greenberg was ousted, but that have since fallen to just $224 million following the insurance giant's near collapse last fall (and subsequent federal bailout).

For decades, this huge block of AIG (AIG, Fortune 500) shares was used as deferred compensation to pay top-performing employees. AIG claims Greenberg repeatedly assured employees that the shares would be held in trust. AIG says in a legal filing that he then reneged on his agreement by taking control of the shares in "one of the greediest acts in corporate history."

For its part, Greenberg's camp will argue that his company can do what it wishes with the shares. No written trust agreement was ever drafted, and there never was any mention of a trust in any of AIG's public filings with the SEC.

So what's happening to the shares? Starr International executives, at Greenberg's behest, plan to deposit them in a Greenberg-controlled Swiss charity. Says one of the lead lawyers for Greenberg's team, Nicholas Gravante, "AIG, having dissipated its assets, now seeks to divert assets committed to charity so that its top executives can make more undeserved bonuses."

Counters Roberta Kaplan, an outside litigator for AIG: "AIG is seeking to recover these assets so that they can be used to fund long-term compensation programs -- not for AIG's most senior executives -- but for many hundreds of AIG employees who are working to repay taxpayers and rebuild shareholder value."

But for AIG to prove this was a trust, the bar is high: AIG needs to show it beyond a reasonable doubt. Greenberg's lawyers succeeded last year in persuading the federal judge hearing the case to dismiss several of AIG's charges against SICO.

The legal war, waged on numerous fronts, including a related case in which AIG is suing Greenberg and his associates in New York State court, has been staggeringly expensive. Last year Greenberg's team put the price of their fight against AIG, regulators and plaintiffs' lawyers at around $230 million. And the meter is still running.

Greenberg's team is led by David Boies, the celebrated trial lawyer. His adversary in this case, Theodore Wells of Paul, Weiss is also a courtroom legend. Wells was on the team that represented Greenberg's former nemesis Eliot Spitzer in his successful efforts to avoid prosecution in the prostitution scandal. AIG has already said it will call Greenberg as a hostile witness.

To make their cases, both sides will offer their own versions of AIG's convoluted creation story. The modern AIG was formed through a Byzantine assortment of companies whose unifying element was eventually Greenberg.

For years, SICO held a controlling stake of AIG shares, serving as a bulwark against a hostile takeover of AIG. Starting in 1970, Greenberg and close associates used SICO to dole out some $2.9 billion worth of shares to top AIG performers, making many employees exceedingly wealthy. The system was highly unorthodox: the SICO disbursements were not expensed and were not dilutive to AIG's stock price, since the company did not have to issue new shares to pay them.

What's more, as designed, they were a powerful instrument of control for Greenberg: employees in the vaunted program could not take control of the shares until they retired from the company in good standing. The system worked fine for everyone as long as the iron-fisted CEO was in control. But once he was pushed out, he took SICO with him, and a fight broke out.

At the heart of the case is the question of whether the SICO shares were, indeed, being kept in trust for AIG employees. AIG lawyers plan to confront Greenberg with videos of two meetings he held as chief executive with employees who were recipients of the SICO shares. At one of those meetings in 2000, Greenberg told the employees that the company put the SICO shares "in a trust and that trust cannot be broken by anybody, any future managements cannot break that trust."

Questioned in a deposition about these assurances in 2006, Greenberg was almost Clintonesque, saying he didn't lie to the employees. "I wasn't talking legally," Greenberg told his relentless inquisitor, litigator Martin Flumenbaum of Paul, Weiss.

In an interview with Fortune last fall, Greenberg repeated that assertion and added that he had always told AIG's board that the SICO plan would not continue if AIG was required to expense the shares. But that, he said, wasn't something he could explain to the employees at the meetings. "You can't go into all the details when you're speaking to a group that you're bringing together, you know, for morale, to raise morale," Greenberg said.

In some ways, the battle seems almost beside the point, given the collapse late last year of AIG and the $150 billion taxpayer rescue plan.

But if it wins the case, AIG should be grateful for Greenberg's investing savvy: before AIG shares collapsed, Greenberg had the foresight to sell some $4 billion worth of AIG stock, but only Greenberg and his associates know where the funds are. If AIG wins this case, it intends to claim that money.

It's still possible the case could be settled before trial. But given the enmity between the two parties, don't count on it.