A funky hybrid of display and search advertising grows despite downturn. 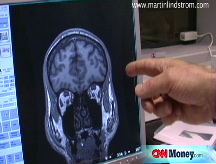 (Fortune) -- It's been a bad couple of months for the online advertising business. Those banner advertisements that run on the top and sides of websites? Down, by many measures. Search advertising, consisting of sponsored links that turn up on Google (GOOG, Fortune 500) and other sites? Holding up, but not growing like it used to.

There's one bright spot in online advertising, though: in-text advertising.

You may have seen these before on sites like Fox News, MSNBC, or iVillage and mistaken them for normal hyperlinks. Certain key words are double-underlined, and users who scroll over those words with their mouse will trigger a box with an ad. If they want to follow the ad, they can click the link.

Vibrant Media, one of the leading companies in the area, says they're seeing twice as many bookings as they did this time last year. The privately held company declined to reveal 2008 revenues but noted that in 2007, revenues increased to $87.8 million, up from $41.6 million the year before.

Vibrant's CEO, Doug Stevenson, thinks people have become more comfortable with the format, which debuted a few years ago to negative reviews. (Early critics said the ads were too startling for users, who didn't expect ads in the form of hyperlinks. Forbes.com reportedly tried using it in 2004, but stopped the trial after the editorial staff complained.)

Stevenson says in-text advertising offers better accountability than display ads because advertisers pick key words and then are charged per click (typically $1 to $5) so they have a better sense of the response they're getting. In contrast, display ads are usually sold based on how many people will see the ad, not necessarily click on it.

For instance, Vibrant recently worked with media agency Mediaedge:cia to help AT&T's (T, Fortune 500) Yellowpages.com get more visibility. Let's say that at a Web site that sells in-text ads, there was a story about dining out. Yellowpages.com would pick key words, like "restaurant," that could be highlighted in the story.

If users rolled their mouse over the word, a Yellowpages.com search box would appear, showing a link with search results on local restaurants in that user's zip code. Kevin Hartbarger, group planning director at Mediaedge:cia, says in this case, in-text advertising was a useful way to help build a user base for Yellowpages.com.

"[Vibrant] probably is in a good space right now given the economy and the pressure that agencies are getting from their clients to make sure their media's as accountable as possible," says Hartbarger. "They live in this nice middle ground between display and search where they can be accountable as performance media but in more premium-type placement."

The company has also added a service where the pop-up box can include related editorial content from other parts of the site. For example, a story on weddings in iVillage could have words highlighted that connect to other stories on the site about wedding gowns and rings.

Stevenson points out that of the two major ways of navigating the web -- search and hyperlinks -- only search has seriously evolved. Down the road, he says, people may come to expect a hyperlink to have a preview of the page they could click on.

"There's a whole range of previews that can be done here -- not just a flat blue link," says Stevenson. "Over time our mission will be to provide more intelligence around the hyperlinks."

With display ad revenue dwindling -- Time Warner (TWX, Fortune 500) this week said AOL's display ads were down 25% in the fourth quarter -- Web sites may be more receptive to alternatives like in-text ads. It's hard to imagine a news site like the New York Times Co (NYT).'s nytimes.com signing on without some uproar from readers and staff. Then again, the newspaper recently decided to sell ads on its front page to attract more revenue. And that, too, was once unthinkable.