At long last, the Treasury Secretary has announced how the Obama administration will try to stabilize the financial sector.

Geithner to the rescue 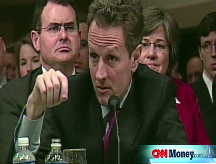 Speaking in the Cash Room at the Treasury Department in Washington, D.C., Geithner introduced a four-point plan that aims to restart the flow of credit to businesses and consumers.

The administration didn't put a price tag on the new plan and said it won't ask Congress for more money, at least right away.

"Instead of catalyzing recovery, the financial system is working against recovery. And at the same time, the recession is putting greater pressure on banks. This is a dangerous dynamic, and we need to arrest it," Geithner said. "It is essential for every American to understand that the battle for economic recovery must be fought on two fronts. We have to both jumpstart job creation and private investment, and we must get credit flowing again to businesses and families."

The key points in the administration's new Financial Stability Plan include:

Testing the health of big banks to weather an even deeper economic downturn. Geithner said the Treasury will "stress-test" the biggest banks and provide capital to those that need it, as the nation sinks deeper into its worst recession in decades.

He said the stress test will apply to institutions with more than $100 billion in assets - a list that comprises 13 banks, from giant JPMorgan Chase (JPM, Fortune 500) to Cleveland's KeyCorp (KEY, Fortune 500), according to a report from analysts at the Stanford Group in Washington.

Analysts say big U.S. banks could use at least $1 trillion in new capital as job losses mount and more borrowers default on mortgage, auto and credit card loans. But Geithner said the administration won't ask Congress now for more money - raising the question of how much capital it actually expects to provide.

Making credit more available to consumers and businesses. The Treasury will provide $100 billion in seed money to expand the Federal Reserve's Term Asset-Backed Securities Loan Facility, in which investors in bonds backed by credit card and other loans can swap those bonds for Treasury securities, enabling them to get additional financing.

The move - which could create as much as $1 trillion in financing for consumers and businesses - shows the government is eager to bolster the capital markets, which provided a large percentage of funding for consumer loans before the bond markets seized up in late 2007.

Creating a private-public partnership to take toxic assets off banks' balance sheets. Policymakers believe clearing bank balance sheets of badly deteriorated loans and securities is a prerequisite for restoring the normal flow of credit into the economy. Geithner said the plan will aim initially to use public financing to create as much as $500 billion in private sector buying capacity, with the prospect of an expansion to $1 trillion down the road.

Observers say drawing private capital back into the market is a key objective of any workable plan.

"Because the new program is designed to bring private sector equity contributions to make large-scale asset purchases, it not only minimizes public capital and maximizes private capital," the Treasury Department said in a fact sheet about the plan. "It allows private sector buyers to determine the price for current troubled and previously illiquid assets."

It remains to be seen, however, how the administration can break the stalemate between banks that are holding troubled assets at one price and investors who would buy only at a lower one.

Addressing the housing crisis. The Fed and Treasury will commit $50 billion to reduce mortgage payments and establish loan modification guidelines. Firms that receive federal aid will have to commit to participate in foreclosure mitigation plans, the Treasury Department said.

The administration said it will soon announce a comprehensive housing plan, which will lean in part on the Fed's efforts to drive down mortgage rates by buying mortgage-backed securities issued by government-sponsored mortgage companies Fannie Mae (FNM, Fortune 500) and Freddie Mac (FRE, Fortune 500).

The new financial rescue plan comes at a tricky time for the Obama administration.

Economic fundamentals are in steep decline around the globe, with the U.S. having lost 598,000 jobs in January and more than 3 million since the recession started in late 2007. Economists have called on governments to expand their spending to avoid a downturn as severe as the Great Depression.

But the $800 billion-plus fiscal stimulus plan championed by congressional Democrats has won little support from Republicans. Many of them say current stimulus proposals will be wasteful and ineffective.

Meanwhile, the government's first effort at righting the financial problems - the Bush administration's Troubled Asset Relief Program, which pledged some $350 billion to banks and other big companies starting in October - has been criticized as a giveaway to well-connected financial interests.

Geithner admitted Tuesday that the shortcomings of the first half of TARP are weighing on Americans' minds.

"Our challenge is much greater today because the American people have lost faith in the leaders of our financial institutions, and are skeptical that their government has -- to this point -- used taxpayers' money in ways that will benefit them," Geithner said.

"We believe that the United States has to send a clear and consistent signal that we will act to prevent the catastrophic failure of financial institutions that would damage the broader economy," he added.

The Obama administration has said it will tighten the terms of further aid to financial companies and demand greater accountability for how taxpayer funds are used. Last week, the administration unveiled a plan to restrict CEO pay at firms receiving government assistance.

Geithner didn't ask Congress for additional funds Tuesday, though he suggested such a request could come down the road. Observers say the government will need much more money to fill the holes in the financial system before an economic recovery can take place.

"I want to be candid: this comprehensive strategy will cost money, involve risk, and take time," Geithner said.

On the verge of new bailout

Rescue tally in the trillions - so far