In tough times, the chief information officer becomes a strategic and financial asset. 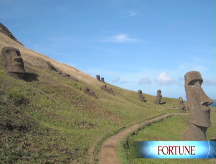 (Fortune) -- There was a time when the geeks who keep a company's tech systems running could get by without knowing the finer details of corporate strategy. You called the chief information officer when you needed a server upgrade, not a strategic plan.

Well, those days are over.

This downturn could mean the end of the sequestered CIO -- that rumpled executive who, like Scotty on Star Trek, has limited social skills and usually emerges from the engine room only when something blows up. In these tough times, CEOs are frequently calling tech chiefs out of the wiring closet and into the boardroom, and putting their business skills to the test.

Why? Budget cuts, for starters. The IT department has to tighten its belt while at the same time helping other divisions use technology to slash costs. Some typical questions that cross a CIO's desk: What if we did those sales meetings as videoconferences instead? Could we shut down the Detroit office and let those folks work from home with wireless laptops? You get the idea.

Another factor: More than ever, companies rely on technology to get basic work done. Because CIOs are the ones who approve, buy and distribute laptops, BlackBerrys, order-tracking systems and other productivity tools, their bosses are leaning on them to take a bigger role in developing strategy. Companies that are planning global expansion, for example, might need to revamp their sales tracking systems in advance.

The shift in the CIO's job responsibilities was a recurring theme earlier this month when Dell (DELL, Fortune 500) hosted tech leaders at a confab in Austin, Texas. Several of the tech leaders said they felt empowered to help their companies make it through this recession, but realized they would have to get more comfortable presenting their big-picture ideas.

At chip giant Intel, for example, the CIO's re-education began even before the downturn. Four years ago, CEO Paul Otellini asked Intel (INTC, Fortune 500) co-CIO John Johnson how IT would support Intel's growth strategy. "The first thing I realized was, I couldn't answer the question," Johnson recalls.

Johnson took a deep look at Intel's overall growth strategy and its technology systems before giving the boss a comprehensive plan. He says he's still improving it. "Today you have to be much more aware of the business goals, and understand the contribution IT needs to offer to make them happen."

So these changes aren't easy, even for the experts. Take Dell. Though the company has a reputation for being ahead of the curve in how it uses technology internally -- its efficient order processing and manufacturing systems redefined the PC industry -- it still has room for improvement. CIO Robin Johnson said he plans to cut the IT budget by at least 10 percent this year, and is working more closely with the company's managers to provide technology that better fits the way employees work.

It's leading some companies to re-think what makes a good CIO. Evan Stewart, who leads technology at aircraft interiors provider B/E Aerospace (BEAV), said times are changing enough that when the board hires his successor, they'll look for someone with broader experience than the typical tech chief. "They know that the next CIO needs to understand technology, but first be a businessperson and know how to add value."

So, the bottom line for aspiring CIOs: Corporate skills are now just as important as coding skills.