Even if GM and Chrysler survive, they're going to be much lesser players on the world stage. 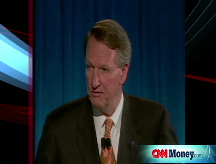 Brands: What stays, what goes
As Chrysler and GM work through their viability plans, they're looking to unload some of their models.
View photos

NEW YORK (Fortune) -- Even if GM and Chrysler survive, they will be lesser players on the world stage

Once you get over the size and magnitude of Tuesday's announcements by General Motors and Chrysler - more layoffs, more plant closings, more discontinued brands, more losses - you begin to think about what the future holds for these two automakers.

It isn't pretty. Even if they should emerge from the current calamity, they will be sadly shrunken companies, shorn of resources and talent and that absolutely vital competitive weapon - scale.

Right now, GM (GM, Fortune 500) and Chrysler are living the nightmare. Their worst fears for the U.S. auto market a few weeks ago have become reality. Chrysler figures U.S. car and truck sales in 2009 will descend to a 40-year low of 10.1 million units - a far cry from the 16 million to 17 million automakers used to consider their God-given right. And over the next four years, Chrysler believes sales will run at an average of 10.8 million cars and trucks - a stunning 1.8 million less than it forecast in early December.

As to whether the companies get the federal aid they need, the immediate future is full of uncertainties: Will GM's bondholders accept a debt-for-equity swap? Will the United Auto Workers union accept a restructuring of its health-car agreement? What conditions will the Obama administration heap on the automakers as conditions for a bailout? Or will Washington decide that an orderly bankruptcy is the best solution for these troubled companies?

Looking further out, say five to ten years, their middle- and long-term futures are easier to divine.

Chrysler, which not so long ago had visions of becoming a high-margin specialist in minivans and Jeeps - a sort of BMW for light trucks - will become a bit player in the American market and remain a negligible one overseas.

Even if a planned product- and technology-sharing deal with Fiat goes through, it isn't likely to make Chrysler competitive in the subcompact, compact, and mid-size car markets where the future of the auto business lies. Under the best of circumstances, the Fiat linkup will likely only be sufficient to keep Chrysler afloat - not make it a contender. The history of partnerships in the auto business argues against much success.

As for General Motors, I fear a worse fate - that of a shrunken giant, an aging athlete with its best years behind it playing out the string.

Human nature tells you how difficult it is for anyone to accept a lesser role in life, no matter the circumstances. GM has already lost its title of world's largest automaker to Toyota. Now it risks slipping behind more dynamic competitors like Volkswagen and Hyundai.

Once it is no longer one of the biggest, GM will no longer have a claim at being the best. The brightest talent will look elsewhere for jobs; suppliers will take their new ideas to companies that are growing, not shrinking; top dealers will accelerate their divestment of GM franchises.

As it becomes smaller, GM will lose the advantages of scale. The car business is a volume business; your cost per unit goes down as your volume goes up. Plants run more efficiently, investments can be spread over a larger cost base and parts cost less. Toyota is a master of using volume to its advantage, which explains its standing in the industry.

GM will also no longer be able to afford the investments in new technology that will be essential to the automotive future. With its vast resources, the automaker used to be able to afford to dabble in a number of alternative fuel strategies - battery, ethanol, hybrid, fuel cell. It wasn't a leader but it could keep pace by spreading its bets over the whole field.

But a smaller GM will have to make choices and focus its resources - something it isn't used to doing. The cost will be higher and the chances of failure greater.

It was good to be the king and it is going to be very difficult to adjust to becoming just another prince. One of the sources of GM's difficulties even before the current crisis was its inability to scale its overhead and its aspirations to its reduced circumstances.

Now, assuming that GM makes it through to 2012 when it says it will be profitable again with government help, it will have to find a whole new way of looking at the world.

That may be the hardest job of all.