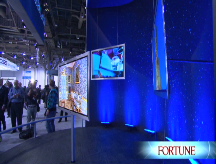 Last week the DVD rental company announced it's reached a mark of 10 million subscribers. Revenues last year were up 13%. The stock price has doubled in the last three months (in this market!). And most importantly, investors are catching on that founder and CEO Reed Hastings is serious about moving Netflix toward delivery via broadband, and away from just those familiar red envelopes.

Critics have frequently chided Netflix (NFLX) for moving too slowly into online streaming. In fact, people have been predicting the company's imminent demise for years. But there's another argument to be made that Netflix's timing on all of this has been close to perfect.

With the rise of Hulu and YouTube and greater access to faster broadband speeds, a wider swath of consumers are finally comfortable with watching streaming video on their computers -- and they're coming to expect it. Netflix says more than 20% of their subscribers are using their instant viewing feature, and that number should only grow. "It's very clear that streaming is energizing our growth," Hastings said recently on an earnings call with analysts.

Netflix unveiled its "Watch Instantly" service, free for subscribers, two years ago. The selection is still paltry compared to the full catalog of DVDs: 12,000 online titles compared with 100,000 DVDs, and it's tough to find many new releases. But there's enough quality to keep anyone busy, with the first season of 30 Rock and the movie No Country for Old Men available for instant gratification.

By offering the service gratis, Netflix made the smart move of letting customers test a service, risk-free, that might have felt unfamiliar at first. (It also goes without saying that in this economy, anything that's free is sure to be appreciated.) Contrast this with competitors like Movielink and Cinemanow, who offered streaming services too, but at an extra cost and for which users had to sign up separately. And now that Netflix users are acclimated to the instant streaming, the company's making their software even more ubiquitous by embedding it in Blu-ray players, Tivo boxes, its Roku product, and Microsoft's (MSFT, Fortune 500) Xbox.

So maybe all the naysayers were wrong about Netflix being unprepared for the day when DVDs become obsolete. Assuming Netflix makes the transition to digital distribution -- no small task, still, because of all the negotiating left to do with movie studios over licensing -- another question emerges: With the new model, can the company make as much money?

Not necessarily. Netflix was able to beat Blockbuster (BBI, Fortune 500) and Wal-Mart (WMT, Fortune 500) at DVD rentals, but they'll have to take on Apple (AAPL, Fortune 500) and Amazon (AMZN, Fortune 500) in the digital world. Analysts Charlie Wolf and Jim Lewellis at Needham wrote in a recent report: "From a fundamental perspective, we believe investors are assigning too much value to Netflix's digital distribution initiative. This market is likely to be far more competitive than the by-mail distribution market, which the company currently dominates...Moreover, Netflix's two major competitors, Apple and Amazon...have also established a cost/pricing structure that is far less profitable than Netflix's by-mail business."

The by-mail business, though, shows no signs of slowing down. And there's plenty for Netflix to work on in the meantime. The company's still waiting for a grand prize winner in its $1 million competition to find a superior algorithm for predicting movie preferences. And subscribers are still adding Netflix's Blu-ray option in droves -- about 700,000 have signed up so far. According to Hastings, the core mail business won't peak until between 2015 and 2018 -- meaning, there's still time for Netflix to perfect its next act.

Can Apple save Hollywood?

How Netflix got started