How does midsized truckmaker Kenworth get access to one of the world's most sophisticated supercomputers? The Internet, of course. 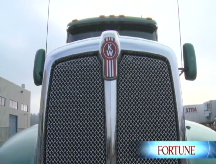 (Fortune Magazine) -- Most people don't spend much time thinking about mudflaps - those strips of rubber behind a big rig's wheels that repel grime and maybe show a gun-toting Yosemite Sam, warning "Back off!" But by using sophisticated design technology, engineers at truckmaker Kenworth discovered that the little flaps were also a major source of drag. Simply trimming and tapering the flaps will cut about $400 from a typical truck's annual gas bill.

How exactly did Kenworth solve its mudflap quandary? The company, a unit of $15-billion-a-year truck conglomerate Paccar, took advantage of cloud computing. In Kenworth's case, engineers rented time on a supercomputer thousands of miles away; that system helped employees root out assorted gas-guzzling design flaws they might have missed had they relied just on computers at Kenworth's facilities outside Seattle.

Indeed, the engineers used rented computing gear to produce the T660, an aerodynamic truck released in 2007 that ditched the typical bulldog look for a more dolphin-like snout and can get roughly seven miles per gallon. (Don't laugh. That's actually impressive for a semi.)

Customers have noticed. Larry Anderson, president of food-delivery company A&A Express, recently ordered several of the trucks. "Every new truck we get is more efficient than the last," says Anderson, who estimates that the new rigs and careful driving could save him a half-million dollars a year on gas. "That's the only way we've stayed in business."

Building more efficient trucks - and building trucks more efficiently - is critical to Kenworth's success too. Revenue at parent Paccar (PCAR, Fortune 500) fell in 2007 and 2008, and management does not expect demand for commercial trucks to improve much in 2009. To keep its edge, the company increasingly relies on technology to deliver design breakthroughs - without breaking the bank.

The resulting design changes aren't visually drastic, but they make a real difference. The slightest shift in the curve of the headlights, the shape of the fender, or the angle of the mirrors can dramatically alter a truck's business value. Take that mudflap, for example: A little haircut added an extra half-percent of fuel efficiency to the T660. Preston Feight, Kenworth's chief engineer, says it is one of several tweaks that could save a 1,000-truck fleet $1 million a year.

Kenworth is also able to use its rented supercomputer to do virtual testing of its truck designs. A few decades ago the company would have had to create a clay model of the truck, stick it in a wind tunnel, and measure the results. The process was costly - "You price clay like you price steak," Feight jokes - and the findings weren't 100% accurate. Kenworth and its rivals later used in-house computers to simulate wind-tunnel tests, but the machines weren't powerful enough to closely estimate what would happen with real air flowing around a truck at 65 miles per hour.

That kind of simulation requires dozens of the latest machines working together, a multimillion-dollar long-term investment that only the largest institutions can afford. A few years ago one of Kenworth's aerodynamics experts learned that for roughly the price they had been paying to buy middling hardware, design-software maker Exa would sell them metered access to a cluster of IBM computers with enough speed to be called a supercomputer. (There's no standard definition of a supercomputer - it's what's fastest at the time.) When Kenworth engineers saw that they would be able to get an idea of how a real truck would perform on the road, it was an easy call.

Other manufacturers are jumping on the cloud bandwagon too. Exa, based in Burlington, Mass., says about two-thirds of its sales come from selling traditional software. But sales from web-based packages like the one Kenworth purchased are growing almost twice as fast, Exa says.

With demand for trucks softening, Kenworth will surely have to make some tough choices about spending. But one area that's not likely to be cut back is the use of rented technology. Earlier this year Feight's engineering team was touching up the successor to the T660 and testing more futuristic ideas using Exa software and IBM (IBM, Fortune 500) computing power. "We exclusively do our engineering and aerodynamics work in digital," Feight says. Put another way, they're in it for the long haul.