The administration says it doesn't want to run banks, but investors still fear a replay of the Fannie-Freddie takeover. 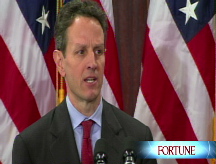 NEW YORK (Fortune) -- What does it mean to nationalize a bank, anyway?

That question has weighed on the minds of investors in the two weeks since the Obama administration's comprehensive financial industry stability plan fell flat.

And it came to a head Friday. Nationalization fears helped drag down shares of Citigroup (C, Fortune 500) and Bank of America (BAC, Fortune 500) as much as 36% at one point Friday. BofA recovered most of its losses to finish Friday down just 3.6%. But Cit's stock closed Friday with a 22% loss.

The term nationalization has been used to cover a range of very different outcomes. Most obviously, it refers to the outright takeover of troubled firms, such as when the Treasury Department put mortgage giants Fannie Mae (FNM, Fortune 500) and Freddie Mac (FRE, Fortune 500) into conservatorship.

But it has also been used by some people to cover sizable investments that give government officials considerable say in a firm's activities -- such as the loan guarantees extended in recent months to Citi and BofA.

The Obama administration has said it wants to keep the banking system in private hands, which seems to suggest it isn't aiming to run the likes of Citi and BofA.

"We have a financial system that is run by private shareholders, managed by private institutions, and we'd like to do our best to preserve that system," Treasury Secretary Tim Geithner said two weeks ago.

But the White House hasn't completely ruled out taking over troubled firms, either - if with a very different intent.

Senate Banking Committee Chairman Chris Dodd, D-Conn., unsettled the market Friday morning when he told Bloomberg Television that he could see regulators briefly taking over Citi or BofA in the name of stabilizing the nation's two biggest banks.

"I don't welcome that at all, but I could see how it's possible it may happen," he said. "I'm concerned that we may end up having to do that, at least for a short time."

The White House moved later Friday to ease fears of a takeover, with spokesman Robert Gibbs telling reporters at an afternoon briefing that the administration wants to keep the nation's banks in private hands.

"The president believes that ... a privately held banking system regulated by the government is -- is what this country should have," Gibbs said.

But Gibbs' statement, while echoing the one Geithner made on Feb. 6, leaves open the question of whether the administration is considering what observers of the financial industry have termed an intervention -- a takeover of a troubled bank for the purpose of breaking it up, bringing in new capital and finding new owners and management.

Many economists say the Obama administration will have to take this tack before the financial crisis is resolved.

"We have no problem in this country shutting down small banks," Simon Johnson, a finance professor at MIT and a former chief economist at the International Monetary Fund, said last week on "Bill Moyers' Journal" on PBS. "In fact, the FDIC is world class at shutting down and managing the handover of deposits, for example, from small banks."

But with the big banks, which employ hundreds of thousands of people and make millions of dollars of campaign contributions, it may be a different story.

"Nobody has the political will to do it," Johnson said. "So you need to take an FDIC-type process. You scale it up. You say, 'You haven't raised the capital privately. The government is taking over your bank. You guys are out of business. Your bonuses are wiped out. Your golden parachutes are gone.'"

There are multiple advantages to this approach, proponents say. They say recapitalizing the banks is necessary, but it will be costly -- and the more current investors share in those costs, the less that burden must be borne by taxpayers.

And any form of nationalization would probably mean the removal of current executives. So it would not reward bad behavior and mismanagement.

But shareholders clearly believe they would be severely diluted in any government action, which explains, in part, why bank stocks have plunged in recent days.

What's more, the Obama administration's insistence that it won't nationalize a bank reminds some of how former Treasury Secretary Henry Paulson repeatedly pledged to stand behind Fannie and Freddie last summer - before he suddenly changed course Sept. 7 and took them over.

Regardless of how the government handles the problems at Citi, BofA and other too-big-to-fail banks, economists say the tab for the financial cleanup will come due -- it's only a matter of who gets stuck with it.

"There seems to be some sort of ideological bias against the government taking over banks," said Paola Sapienza, a finance professor at Northwestern University in Evanston, Ill. "But eventually we're going to pay for this, one way or another."