If politicians were serious about reform, they'd posture less and would attack these four economic evils.

By Allan Sloan, senior editor at large
February 27, 2009: 6:12 AM ET
Is nationalization unavoidable? 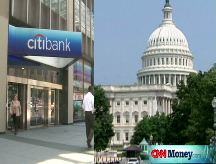 (Fortune Magazine) -- Wall Street bashing is all the rage in Washington these days. That's understandable, given that financial excesses played a serious role in starting the recession and that some of the firms that have gotten billions of taxpayer dollars are also paying out billions in compensation.

But so far, all Washington has done is enact high-profile but ineffective pay caps and rant about symbols like former Merrill Lynch CEO John Thain's $1.2 million office-decorating bill. (Here's why the pay curbs are ineffective.) So what could our national leaders do to show that they're interested in substantive reforms that would risk annoying the powers that be, as opposed to engaging in politically safe symbolism?

Simple. I'll believe Washington is serious about helping regular people - and curbing some of Wall Street's excesses - if it adopts four pieces of legislation I'd like to see. The first two would help average people who are being gouged by credit-card-issuing banks; the third would inflict pain on some corporate directors; the fourth would close the loophole that lets mega-rich hedge fund and buyout guys pay low taxes on the hundreds of millions (or billions) of dollars they earn in a good year.

And here we go:

Some banks can change the interest rate on credit card balances for pretty much any reason they choose, including a borrower's missing one payment, even if it's for something like a utility bill. So instead of being on the hook for, say, 12% interest (which is bad enough), borrowers may suddenly find themselves paying an obscene 29.9%. Regulators are trying to deal with aspects of this problem, but Congress could eliminate it overnight through legislation.

The banks' policies are disclosed in the all-but-unreadable notices they send their credit card customers. That makes it legal. But it's wrong. It's especially wrong now, when so many people are struggling to pay their bills and are likely to fall into the missed-payment, higher-rate trap that would make their lives even more difficult.

One of the banks' nastier practices is offering credit cards to people who have recently emerged from bankruptcy or had other financial problems. Trolling this market lets banks hook marginal borrowers who are likely to get hit with lots of interest and fees as they struggle to stay afloat. This isn't "subprime" lending, which sounds almost benign, like giving troubled people a chance. Instead it's like marketing booze to alcoholics - it tempts vulnerable people to hurt themselves. It should be banned.

Directors of firms that have gotten a second (or third) batch of federal bailout bucks ought to share the pain those firms have inflicted on employees, shareholders, and taxpayers. Congress should limit the pay and perks of longtime directors of repeat bailout borrowers, given that these folks got more money for part-time jobs done badly than the average American family gets for full-time work.

This isn't directly connected to the ongoing taxpayer bailout of Wall Street. But it's Wall Street's most blatant tax game. Managers of buyout funds and hedge funds who get a piece of their investors' profits as a fee typically pay capital gains tax (top federal rate: 15%) on this income rather than the top "earned income" rate (35% plus 2.9% for Medicare) that applies to fees and salaries.

My rationale for closing this loophole during a time of bailouts: Struggling buyouts are starting to infect the financial system, and some hedge fund games have helped destabilize it. So let's tax these players like regular folks and use the proceeds to offset our massive bailout costs.

If any of these real reforms become law, I'll be the first to salute. So far, though, I'm seeing more symbolism than substance. I don't expect the situation to change anytime soon. More's the pity.