The latest bailout of the struggling insurance giant did little to calm fears about the financial sector as investors worry about more troubles ahead.

Liddy: How to lose $61 billion 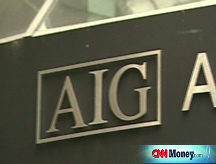 NEW YORK (Fortune) -- The government has a new remedy for sickly financial giants -- but signs of healing remain scarce.

On Monday, the Treasury Department unveiled yet another plan to support struggling insurer AIG (AIG, Fortune 500), which posted a 2008 loss of $99 billion.

Treasury said the latest restructuring in AIG's bailout -- the third since the company first received an $85 billion loan last September -- "will help stabilize the company, and in doing so help to stabilize the financial system."

There was no such stabilization on Wall Street though Monday. Financial stocks plunged for the second straight session.

Investors are worried that more pain lies ahead as the economy deteriorates and policymakers struggle to devise a workable solution to the financial meltdown.

"The market wants to see the government get ahead of these problems, instead of receiving a drip feed of plans and possible plans," said Benn Steil, director of international economics at the Council on Foreign Relations. "The next few weeks we'll just keep hearing the same questions about what's next."

For now, the Treasury plans to provide New York-based AIG with a $30 billion equity line that can be drawn as needed. The government also will convert its $40 billion preferred-stock investment into new shares that "more closely resemble common equity and thus improve the quality of AIG's equity and its financial leverage."

The conversion plan resembles last week's rescue of Citigroup (C, Fortune 500). In that case, the government agreed to convert as much as $25 billion worth of preferred stock into common shares, matching similar moves by private investors.

The latest moves to prop up AIG and Citi appeal to policymakers on two fronts. First, they add to the common equity bases of the two companies. Officials seem to hope this will relieve fears that shareholders will be totally wiped out in a government takeover.

Second, by converting from preferred shares to common stock, the government does not have to kick in much in the way of new funding upfront. That's a key consideration as the government's support for troubled banks grows more unpopular with the public.

But observers say the latest interventions fall short because they don't answer two key questions: Will the government be forced to take full control of struggling financial firms? And if so, on what terms?

Geithner and other officials have repeatedly stated their preference for a privately owned financial system. But many economists doubt the U.S. can stage an economic recovery without first doing a sweeping restructuring of troubled financial firms - an option derided in some circles as "nationalization."

Douglas Elliott, a fellow at the Brookings Institution, said Treasury is constrained in dealing with problems at firms like AIG by the decisions policymakers made in the earlier stages of the crisis.

"You could choose to stop the flow of money, but the likelihood is you'd lose huge amounts," said Elliott, referring to the $150 billion the government poured into AIG in previous rescues last fall. "You really have no choice but to look at the money that has already been invested as water under the bridge."

So AIG, which initially was paying a double-digit percentage interest rate on its Fed loan, has since had the rate sharply reduced in a bid to stem the bleeding.

What's more, the dividends on the preferred shares were cumulative, which meant that if AIG missed a payment, it would be forced to pay it the following quarter. With the common stock, if AIG misses a payment, it will not have to make it up.

In essence, the government is giving AIG more latitude to conserve cash by cutting dividends. There was a similar agreement regarding some of Citi's preferred shares last week.

But while the conversions will ease the cash drain at Citi and AIG, they have done nothing to quell investor fears that other firms are next for this new type of bailout. Shares of Bank of America (BAC, Fortune 500) and Wells Fargo (WFC, Fortune 500) each fell more than 10% in late afternoon trading Monday, while JPMorgan Chase (JPM, Fortune 500) was down 6%.

Steil said the Obama administration's failure to lay out a comprehensive and detailed response to the financial sector mess is making matters worse and only serving to add to the cost of cleaning it up.

"The government has been in denial," Steil said. "Right now, they're trying to do a little bit of everything at once -- and the risk is that you create a whole new phase in the crisis. There doesn't seem to be any end game."

AIG rescue has a long way to go
Related Articles