Taking the charge out of Chevy's Volt

A new study casts doubt on the benefits of the automaker's much-hyped plug-in hybrid. 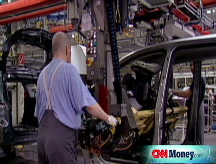 NEW YORK (Fortune) -- Any hope that General Motors can survive without massive aid from the federal government was dashed last week when the automaker reported a huge fourth-quarter loss.

Now the Obama administration's auto panel is determining whether the viability plan that GM (GM, Fortune 500) submitted has any merit. But one of the main justifications GM offers for its long-term survival, "leadership in advanced propulsion technology," has been shaken by a report from Carnegie Mellon University.

The study concludes that plug-in hybrids like the Chevy Volt - GM's most publicized technology project - "are not cost effective in any scenario." GM says the Volt can go 40 miles on a single charge. But a better choice, according to the report, is a car that goes less than 20 miles on a charge.

GM wound up 2008 on life support. After losing $43.3 billion in 2007, it reported another $16.8 billion in losses for 2008. That left cash on hand at the end of the year at just $14 billion. Since the automaker is burning cash at a rate of greater than $1 billion a month, it needs quick help from the government to stay in business until springtime.

But to get that money, GM has to convince Uncle Sam that it has a reasonable shot at survival. And that's where the Volt comes in. It has been the subject of relentless promotion long before its scheduled debut at the end of 2010, and it gets prominent display in GM's viability plan. The Volt has been referred to in the media as "the car that could save GM."

But GM made some unusual decisions in designing the Volt. It decided that it wanted the car to go 40 miles on a single electrical charge because that was the maximum distance that it said most Americans travel on their daily commutes. Trouble is, configuring the car for all that electric driving means installing lots of big, heavy batteries.

The Carnegie Mellon study, conducted by engineers from three different departments, constructed computer simulation models to determine the impact of additional batteries on fuel consumption and cost and greenhouse gas emissions over a range of charging frequencies.

It found that small-capacity plug-ins that get less than 20 miles per charge are more efficient than conventional hybrids. And it said that large capacity hybrids like the Volt that go 40 miles or further on a charge are never cost-effective, because the batteries cost and weigh too much.

A car with the Volt's range, according to the study, would also be extremely uneconomical traveling fewer miles as it hauls around battery capacity it doesn't need.

The Carnegie Mellon study says small-capacity plug-ins "would be a robust choice for minimizing gasoline consumption, cost, and greenhouse gas emissions," and it said plug-ins perform best when they're sized according to the charging patterns of the buyer.

Nearly 50% of U.S. vehicle miles are traveled by automobiles covering less than 20 miles per day, according to the report, and it concludes that 20 miles is a more sensible range. It also notes that as the charging infrastructure in public places becomes widespread, cars will be able to travel shorter distances between charges.

With a likely price of $40,000, the Volt has always been a dicey economic proposition for GM. At that cost, the car would be limited to buyers with a high income who can afford a car - most likely a second or third one - with limited functionality. Nobody will want to take a Volt on a trip much beyond its 40-mile range because it is too inefficient.

The president's auto panel will have lots to consider as it evaluates GM's plan to get back to profitability. If the Carnegie Mellon study has real merit, the automaker should consider whether it should continue developing the Volt in its current form - or scale it back so that its technology is less sensational, but more affordable.