Several pharma companies have promising vaccines and anti-virals in the pipeline. 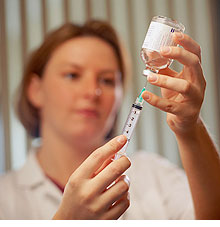 NEW YORK (Fortune) -- The rush to respond to the swine-flu outbreak could provide an opportunity for vaccine and antiviral developers to showcase new biotechnologies sooner than expected.

There's no vaccine for the exact strain of swine flu yet, so the immediate course of action lies with currently available flu antivirals. The Centers for Disease Control and Prevention have 50 million treatment courses of such drugs as Tamiflu and Relenza. The agency says lab tests show the swine flu virus is "sensitive" to those treatments. The Department of Homeland Security has asked for $1.5 billion from the government to "acquire antivirals and invest in a vaccine," though officials haven't decided whether to produce a vaccine yet. The pharma maker Roche had $530 million in Tamiflu sales last year while GlaxoSmithKline (GSK) had sales of $105 million for Relenza.

The availability of flu-specific vaccines has a lag time, typically four to six months after a new strain appears, because scientists must grow millions of copies of the virus strain in chicken eggs. But several pharmaceutical and biotechnology companies are experimenting with quicker ways to produce vaccines, cutting the incubation period down to as little as 10 weeks.

These newer vaccines are far from reaching the market, with many of them still in clinical trials and unapproved by the Food and Drug Administration. But investors seem ready to bet on their potential. Since the swine flu hit, the stocks of some anti-flu drugmakers soared; Roche and GlaxoSmithKline saw boosts because of Tamiflu and Relenza, while smaller vaccine creators like Novavax (NVAX) and BioCryst (BCRX) saw share prices rise more than 70% in one day.

Here's a look at a few of the up-and-coming potential medicines and technologies that could help with swine and other types of flu strains in the future.

Baxter International: The drug giant, based in suburban Chicago, requested a sample of the swine flu from the World Health Organization to develop a candidate vaccine through vero-cell cultures, which creates the vaccine by growing the virus in animal cells instead of eggs.

Baxter (BAX, Fortune 500) used this method to develop Celvapan, a bird-flu vaccine that could be used if the WHO declared such a pandemic. It has already received approval for use in Europe and is awaiting approval in the U.S. A Baxter spokesman says a swine-flu vaccine made through vero-cell technology could take only 13 to 16 weeks to provide initial doses.

Novavax: Using technology based on recombinant virus-like particles, the same method used to develop Gardasil, the women's HPV vaccine, Novavax is developing treatments for seasonal and bird flu. CEO Rahul Singhvi says the company could make a vaccine for swine flu within 10 to 12 weeks using VLP technology because scientists need only the genetic sequence of the virus (the swine flu sequence was released last week), instead of the virus itself, to create the vaccine.

"It's a proven technology with Gardasil," Singhvi says. "Therefore it's not a leap of faith that we could test one for swine flu." Singhvi estimates it would cost $100 million to create a vaccine and says Novavax has offered its services to the government.

BioCryst Pharmaceuticals: Instead of a vaccine, BioCryst is developing a flu antiviral that's currently in clinical trials in Japan and the U.S. The medicine, which would differ primarily because it wouldn't be taken orally or inhaled (like Relenza), could prevent a "broad range of strains," according to a spokesman. The 80-person company is developing the antiviral, called Peramivir, through a $103 million research grant from the U.S. Department of Health and Human Services.

J&J's secret to success: Diversify in one industry