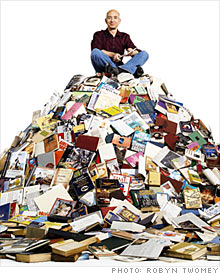 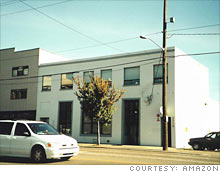 Amazon's journey
Since its inception Amazon has consistently tried to enter new businesses. Here are its greatest hits (and misses).
1995: Amazon launches
Jeff Bezos ditches his finance gig to start a new company via the nascent web. The first office (above) is in Seattle. HIT
1997: Offers recommendations
Amazon analyzes purchases to make personalized suggestions to customers. HIT
1998: Adds music and video
DVDs and CDs are natural extensions of books; electronics and other fare soon follow. HIT
1999: Bids for auctions
Amazon Auctions, an effort to take on eBay, never gains traction. MISS
2001: Unveils Marketplace
Creates a venue for third parties to sell used books and CDs next to Amazon's new offerings. HIT
2006: Opens Unbox
Bezos tries to get into the video-download business. He'll later try to develop a music-download business to rival Apple's iTunes Store. JURY OUT
2006: Gets on the cloud
Amazon announces Ec2, a "cloud" computing system that lets customers rent space on Amazon's servers. JURY OUT
2007: Releases Kindle
The first version of the lightweight e-reader is embraced by geeks and technophobes alike. HIT (SO FAR)

(Fortune Magazine) -- On a bright May morning Jeffrey Bezos descended from atop Mount Seattle unto the press corps. He appeared casually on stage in a standing-room-only theater in New York City. Like another messenger of long ago, he carried a tablet. And he said unto the people: "Ladies and gentlemen, I'm excited to introduce Kindle DX." Keyboards tapped. Shutters clicked. And as the Amazon founder and CEO turned a 9.7-inch display toward the masses, they saw an inscription: The New York Times.

We live in a culture of product lust, in which every new release is hyped and deconstructed, only to be dismissed in favor of the next shiny web-enabled wedge of plastic. But Kindle DX, a large-screen e-reader designed to optimize the presentation of newspapers and textbooks, bears little resemblance to anything else in the gadgeteria. The $489 tablet technically is portable but slides comfortably into no pocket. With all the sex appeal of a bamboo cutting board, it would look more at home in Sur La Table than Best Buy (BBY, Fortune 500). It will impressively download any of the 285,000 e-books available at Amazon.com in less than a minute. But it features a black-and-white display with a crippled web browser, no video, and not even a backlight. It's a brash example of a single function trumping broad ambition.

Apparently doing one thing well is enough, at least for now. Amid the malaise of the retail sector, Amazon (AMZN, Fortune 500) blew past expectations when it reported 24% year-over-year earnings growth in the first quarter. A key driver was Kindle DX's predecessor, Kindle 2, a $359 device that made its debut in February. As consumers everywhere curtailed spending, Kindle 2 was flying off Amazon's virtual shelves. "Kindle sales have exceeded our most optimistic expectations," Bezos declared at the time.

And now, in rapid-fire succession, the company has unveiled Kindle DX to greater expectations still. While newspapers have always been part of the Kindle playbook, Kindle 2 presents content on a display roughly the size of a paperback. The large-screen DX is designed to favor the type of graphics-heavy presentation found in college textbooks. Thanks to an accelerometer, the display can also be viewed sideways, broadsheet-style. Which means that packed inside the device is a burden so large that one can hardly imagine it fitting within a 10.4-by-7.2-by-0.38-inch frame. It's meant to be a savior.

The device has been called the iPod of reading, but unlike Apple's music player, the new Kindle has been met less with lust and awe than with hope and wonder. Could this rather plain-looking and pricey gadget actually pull off something so monumental as reversing the slide in book publishing and saving newspapers? Um, maybe?

In the comfort of Seattle headquarters a week after the DX event, Bezos is surrounded by handlers who mind his clock, police his conversation, fetch water, and signal to him from the far side of the room. Dressed in jeans and an oxford shirt, he's genial and conversational but religiously on message. Even his famous projectile guffaw seems premeditated, a human laugh track inserted to denote intended levity.

Kindle is sometimes referred to as an e-book reader. But that's a bit of a misnomer, because even the original Kindle (which now looks clunkier than a first-gen iPod) was designed with all types of long-form narrative in mind. Newspaper subscriptions were available at launch (editorial content is delivered every morning by four for a monthly fee of up to $14.99), and they quickly rose to the top of the bestseller list, where they remain today.

The willingness of Kindle owners to purchase daily content should be an obvious lesson - the business is news, not paper - and further expose the foolishness of giving everything away on the web. "I don't want to oversimplify what's happening in media. It's very complicated," says Bezos. "But I find it hard to believe that the primary way of reading newspapers 10-plus years from now is going to be on printed paper."

What's Amazon's interest in hastening the move to digital? "The math is compelling," he says. "There is a genuine opportunity to make the cost structure of printing and distribution much more attractive."

Amazon is notoriously tight-lipped about details of all sorts, and that reticent culture clearly starts at the top. Far from revealing sales figures or margins on Kindle, Bezos and his charges won't confirm where the device is manufactured, what the revenue-sharing arrangements look like, or whether publishers even know how well their Kindle editions are performing. That leaves the analyst community guessing about, well, everything.

One firm, iSuppli, puts the $359 Kindle 2's materials and manufacturing costs at $185. (The biggest expense is the $60 E-Ink display.) Clearly there's more to selling a device than buying and assembling parts. Beyond overhead and software development, Amazon needs to account for the lifetime of wireless access that comes with each device. But most company watchers think that Bezos is positioned to make a fortune on the device. Barclays Capital predicts Kindle devices will produce $840 million in profit on $3.7 billion in sales in 2012. That's roughly 20% of Amazon's total sales and profit today. A recent Citigroup report pegged total Kindle sales at roughly 500,000 units.

Such numbers don't exactly translate to a white-earbud phenomenon (Apple (AAPL, Fortune 500) has shipped more than 200 million iPods), but anecdotal evidence shows that Kindle has infiltrated one circle in particular. Next time you fly (or just pass through) business class, notice how many professional travelers have Kindles. And if you're carrying one, prepare to answer questions: How do you like it? Is it worth it? "They're not gadget people," Bezos says of the early adopters. "I think of a gadget as something that you buy, play with awhile, and stick in a desk drawer. Nobody calls their microwave oven a gadget. It's too useful."

Amazon has sold all sorts of electronics over the years, but bridging the gap between retailing and manufacturing a highly complex device would seem a perilous venture. Apple's success notwithstanding, the two aspects of business require distinct skill sets. It's not surprising that Bezos would try. By now Amazon has a long history of expanding into areas where it didn't obviously belong - and altering entire industries in the process.

In the oft-repeated legend, Bezos gave up a comfortable finance career in New York City to travel across the country and begin selling books online at a time when it seemed somewhat ridiculous to do so. While in the middle of conquering one industry, the retailer shrugged off the limiting association of "Earth's biggest bookstore" and plowed into everything from music and movies to toilet seats and treadmills. Each time the company would approach profitability, it seemed, it expanded in a new direction. Amazon has even broadened the definition of retail by providing a platform for third-party sales, offering fulfillment services, and selling "cloud" computing services to the enterprise.

Of course there have been brushes with failure - most notably with A9, a foray into the search business, and with an attempt at taking on eBay (EBAY, Fortune 500) with auctions. One person who has worked closely with the company says digital music and movie downloads have been a disaster: "Unbox has been a complete and utter failure," the source says. (The company counters, "We are very pleased with our Amazon Video on Demand business.")

And yet such lapses have done little to squelch an overriding sense of adventure. "The thing that allows for all the teams to come together after a failure is the recognition that this is just a first failure [for the project]. We may have to work through a couple more," says Bezos. "After every failure, we ask ourselves, 'Do we still believe in the vision?' If we have conviction, that gives us energy to pursue [another] approach."