Manufacturers are experimenting with aroma infusions that can trick our brains into thinking we are tasting certain flavors. 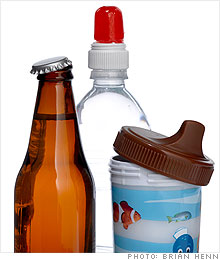 Tech that tricks the tongue
ScentSational Technologies has released one consumer product, Aroma Water, that uses smells to replicate flavors. Here's how it works.
1. FDA-approved flavors are sealed into a thin layer of plastic that coats the inside of the bottle cap. Before the seal is broken, the fragrance infuses the water with a fruity scent.
2. When a consumer pops open the bottle top, breaking its seal, the fragrance is also released into the air, and it travels along the back of the throat to the nasal passage, enhancing the fruity taste.

The latest trend in food packaging seems straight out of science fiction: Jars and boxes lined with "smell technology" emit molecules that push against their contents, infusing the items with different flavors. The concept, however, is steeped in real science: Researchers have discovered that most of what we call taste happens not in our mouths, but through our noses. Aromas, in essence, can trick your brain into thinking you are tasting certain flavors.

An upstart called ScentSational Technologies, founded in 1997 in Jenkintown, Pa., is working with a number of food companies to harness the science of smell. The aim: to produce tasty products without sugary additives like corn syrup or expensive ingredients such as heavy cream.

ScentSational Technologies says it is working with a baby-food producer to add an odor to the seal of its caps so that when parents open the jars, they can smell "freshness"; it's also collaborating with a cereal maker to add fragrance to plastic bags, "sweetening" the product while actually reducing the amount of sugar. ScentSational Technologies founder Steven Landau says he can't disclose clients' names because the projects are still in the experimental stage.

Another reason food manufacturers may be staying mum: the risk of a backlash from consumers, who are increasingly concerned about food safety and processing. Landau insists there's nothing unnatural about smell infusions - at the most basic level, the smells simply are a set of molecules - and he says he doesn't need approval from the FDA because his flavored-smell suppliers already have the government's okay.

But there's something disquieting about what he's proposing: If a cup of black coffee can be infused with the smells of sugar and steamed milk, tricking the brain into thinking it's a sweetened latte, why bother with the coffee at all? A cup of hot water could become a stand-in for any warm beverage. Similarly, a nutrient-rich vitamin bar could "taste" like cake. Whether consumers embrace or reject this latest technology remains to be seen, but Landau and his clients certainly have given us food for thought.

The end of blogging