Apple has to try harder

A new crop of smart phones is sure to erode the iPhone's profit margins. How will Apple respond? 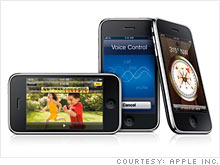 NEW YORK (Fortune) -- Now that the dust has settled from Apple's iPhone 3GS announcement -- video camera! compass! better battery life! -- it's time to face facts. Though Apple still leads rivals in style and technology, it's not the breakaway frontrunner it once was. The new phone is cool and all, but now Apple is looking over its shoulder -- and it will have to make some adjustments.

That's a big change from just a few weeks ago. Back then, the only credible competitors the iPhone faced were a sleek but boring BlackBerry line from Research in Motion (RIMM) and an exciting but chunky G1 from Google (GOOG, Fortune 500).

Since then, however, the landscape has changed dramatically. Suddenly Palm (PALM) appears to have a potential hit with its new Pre, and Google is showing off slimmer second-generation (G2) Android phones. (I've used both the Pre and the G2, and they're pretty darn nice.) All of this new competition is good for consumers, but probably not for Apple's profit margins. Here's why. When you sign up for AT&T (T, Fortune 500) service and buy an iPhone, Apple (AAPL, Fortune 500) actually gets about $500 -- that's $200 from you, $300 from AT&T.

AT&T is willing to pitch in for your iPhone purchase for a couple of really important reasons. One, iPhone users rack up fat monthly bills for Internet service, so AT&T knows it will quickly make its money back. Two, AT&T is the only U.S. carrier with the right to carry the iPhone -- which has helped it to steal those high-value customers from other carriers.

But these new iPhone rivals are bound to alter the math of the phone wars. If the Palm Pre and new Google phones can even approach the iPhone's ability to attract high-value data junkies, AT&T will have less incentive to subsidize the iPhone so heavily. And if Apple begins selling the iPhone through other U.S. carriers, subsidies will come under even more pressure.

Keep in mind, these other phones don't have to overtake the iPhone to put pressure on Apple's prices. They just have to come closer than they have in the past. Apple is well aware of the problem, and is attacking it on multiple fronts. A team of engineers is working on new, low-cost system-on-a-chip designs that should help lower costs and bolster margins. In the iTunes App Store, new pricing options should bring in new revenue from iPhone and iPod touch users.

And perhaps most important, Apple seems to be getting the hang of the high-margin online paid services business. Exhibit A is "Find My iPhone," a new feature that lets forgetful owners pinpoint lost iPhones on a map, remotely trigger a "find me" alarm and even erase all their data. Not only is this jaw-droppingly smart, it's the most compelling reason yet to sign up for Apple's $100-per-year MobileMe service. Apple will need more ideas like that if it's going to make up for the thinner margins that inevitably come with increased competition.