Ben Bernanke's appearance before Congress today sheds light on the Bank of America CEO's mindset as he closed in on the bank's acquisition of Merrill Lynch last fall. 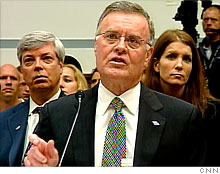 (Fortune) -- One of the enduring mysteries about Ken Lewis' decision to proceed with Bank of America's $50 billion acquisition of Merrill Lynch last fall is why Lewis did not disclose Merrill's growing weekly multi-billion dollar losses to his shareholders before they voted on the deal on December 5. Was he pressured to close the deal by Federal Reserve Chairman Ben Bernanke and then Treasury Secretary Hank Paulson? Or was Lewis determined to add the investment bank to BofA's financial empire come heck or high water?

Bernanke's testimony before the House Committee on Oversight and Government Reform today shed light on some of the mystery as have other documents that the committee has recently put into the public record. For his part Bernanke unequivocally stated that he did not in any way urge Lewis to withhold information about Merrill's growing losses from Bank of America's shareholders. Bernanke said that was a decision for Lewis and his board of directors.

"Neither I nor any member of the Federal Reserve ever directed, instructed, or advised Bank of America to withhold from public disclosure any information relating to Merrill Lynch, including its losses, compensation packages or bonuses, or any other related matter," he told the committee earlier today. "These disclosure obligations belong squarely with the company, and the Federal Reserve did not interfere in the company's disclosure decisions."

This statement would support the version of events that started coming into focus on June 11 during Lewis' sworn testimony before a joint hearing of the House Oversight and Government Reform Committee and Domestic Policy Subcommittee. During the hearing a set of previously private emails that circulated among Federal Reserve officials about Lewis' behavior were entered into the public record.

Typical is one from a Fed official on December 13 that discussed "the clear signs in the data we have that the deterioration at Merrill Lynch has been observably under way over the entire quarter -- albeit picking up significant[ly] around mid-November and carrying into December -- Ken Lewis' claim that they were surprised by the rapid growth of the losses seems somewhat suspect."

The law and Ken Lewis

Lewis had both a fiduciary and legal obligation to his shareholders to disclose material information about Merrill Lynch, especially before the shareholder vote. A simple majority vote against the deal could have stopped the acquisition dead in its tracks. The law seems pretty clear on this issue: The SEC's rule 10b-5 prohibits any act or omission resulting in fraud or deceit in connection with the purchase or sale of any security.

In the end, Lewis decided not to disclose what he knew to his shareholders, who overwhelmingly voted to approve the deal on December 5. Bank of America's stock has fallen around 65% since Lewis announced the Merrill acquisition.

When asked to comment about the lack of disclosure, a Bank of America spokesperson wrote in an email that "We believe we made the required disclosures before the Dec. 5 shareholders meeting" and that "We are looking forward and do not feel it is useful to constantly discuss history that cannot be changed."

This legal conundrum -- whether Lewis should have disclosed the information he knew to his shareholders -- was exactly the point Rep. Dennis Kucinich (D-Ohio), among others, hammered Lewis about repeatedly at the June 11 hearing. The committee hearing was designed to figure out whether federal regulators put undue pressure on Lewis to complete the Merrill deal in the months after its announcement and the firm's performance deteriorated rapidly.

In response to questions from legislators, Lewis' answers were all over the map -- at one point acknowledging that he received weekly reports about Merrill's financials beginning September 15. (Some 200 Bank of America officials were dispatched to Merrill in the days after the deal was announced to monitor the firm's finances and were said to be reporting daily to some Bank of America executives.) At other points he insisted that it was not until December 14 -- nine days after the shareholder vote -- that he became fully aware of the magnitude of Merrill's "accelerating" losses.

What Lewis knew about Merrill's losses

Rep. Kucinich for one was not buying what Mr. Lewis was selling. "Mr. Lewis, in our review of the Fed's documents, it reveals that -- in contrast to your representations to us today -- Fed officials concluded that you must have known about the accelerating losses at Merrill much earlier, as early as mid-November, when your shareholders could have voted to disapprove the merger," Rep. Kucinich said.

To bolster his point, Rep. Kucinich entered into the record a Federal Reserve document -- an analysis of the merger done by PIMCO, the investment management firm, for the Federal Reserve -- from December 21, that concluded, "[Bank of America] management's contention that the severity of Merrill's losses only came to light in recent days is problematic, and implies substantial deficiencies in the due diligence carried out in advance of and subsequent to the acquisition."

Finally, Rep. Kucinich cited a December 23 email to Fed Chairman Ben Bernanke from Scott Alvarez, the Fed's general counsel, that stated "Lewis should have been aware of the problems at Merrill Lynch earlier, perhaps as early as mid-November, and not caught by surprise."

Kucinich then entered into the record a chart that summarized the information about Merrill's week-to-week losses that Lewis began receiving from Merrill Lynch soon after the merger was announced on September 15. Kucinich's chart makes clear that Lewis had to know about Merrill's growing losses well before the December 5 shareholder vote. For instance, in the first week of October, the chart showed, Merrill lost $1.3 billion, lost $257 million the next week, lost $702 million the week after that and then lost $2.2 billion in the week after that.

So, for the four weeks roughly covering the month of October -- when financial markets seized up following the collapse of Lehman Brothers and the failure, by Congress, to pass the first version of the Troubled Assets Relief Program -- Merrill lost a total of $4.4 billion. During the week of November 10, the reports Lewis received showed that Merrill lost another $4.4 billion. At Kucinich's request, Pierre Sprey, a longtime Defense Department official and the man who helped design the F-16 fighter, did a statistical analysis of the Merrill losses and concluded "the evidence for a constantly deteriorating...trend is much stronger on November 14 than it is on December 12." Sprey's analysis was also put into the public record at the Lewis hearing.

Despite all this evidence, Lewis made no disclosure about the losses to his shareholders. In response to Rep. Kucinich, he confirmed that he had received weekly financial reports about Merrill from September 15 on. But during the same hearing on June 11 he told Rep. Peter Welch (D-Vermont) that it wasn't until December 14 -- after the shareholder vote -- that he became aware of "accelerating losses." It was only after the shareholder vote that Lewis said that he and his executive team started thinking about invoking the MAC ("material adverse change") clause to walk away from the merger agreement with Merrill.

Three days later, Lewis explained that he contacted Henry Paulson, then Secretary of the Treasury, to suggest that he was considering invoking the MAC clause to get out of the Merrill deal. That phone call led to a series of meetings and conversations that convinced Lewis not to invoke the MAC clause.

In his February deposition before Andrew Cuomo, the New York State Attorney General, and in subsequently released Bank of America board minutes and in Lewis' June 11 testimony, he said that Paulson pressured him not to invoke the MAC clause. Moreover, Lewis claimed that Paulson threatened to fire him and his board if he did and then, once Lewis decided not to call the MAC and to move forward with closing the Merrill deal, Lewis said Paulson and Bernanke agreed orally to provide an additional $20 billion in TARP funds to the merged firm.

In the end, Lewis chose to close the Merrill deal on January 1 without trying to renegotiate any aspect of it. In the subsequent two weeks after the closing, he and his executive team worked overtime to arrange with Paulson and Bernanke to secure a second, $20 billion TARP installment. (The bank had already received a $25 billion cash infusion from the federal government in October).

BofA also entered into a loss-sharing arrangement with the Fed surrounding $118 billion in the bank's toxic assets (much like the Fed had done a few months earlier with Citigroup, although to date this arrangement with BofA has not been consummated and, according to Bernanke, will not be because "of the general improvement in the markets."). The additional government financing for BofA -- bringing its total TARP funding to $45 billion -- was announced on January 16, four days before the end of the Bush administration.

Lewis' nuanced testimony -- in which he admitted thinking that Merrill's accelerating losses were problematic but only after BofA shareholders had voted in favor of the Merrill deal -- left a number of congressmen incredulous.

Typical was Rep. Elijah Cummings (D-Maryland) who said to Lewis, "It just seems to me that a person with your experience. . .would have said, 'I'm going to stand on principle. And my principles tell me that there's a MAC here. There's a real problem. And if I go down, I go down, but I'm going down with principle.'" Cummings continued, "[I]t seems to me if I had this kind of information, I wouldn't even want my shareholders to be voting on something [when] they did not have full disclosure. And I'm trying to figure out where does the disclosure come in, why weren't things disclosed?"

Lewis did not answer Rep. Cummings' question about the disclosure to shareholders. He did however tell Rep Kucinich, "We take disclosure very, very seriously. If anybody in our legal group had suggested we do anything of that nature, we would have done it."

The Committee on Oversight is not finished. As Rep Kucinich told FORTUNE, "I don't think anybody was satisfied with Mr. Lewis's explanation of the issues raised in the documents revealed at our hearing. Rather than put the Committee's questions to rest, I think Lewis's answers heightened the concerns that prompted them."

Going forward, the committee intends to call Paulson to testify about the BofA-Merrill deal before the Congressional August recess. Chances are good that the former Treasury Secretary's testimony will shed more light on whether Ken Lewis violated securities laws or whether Paulson felt closing BofA's deal for Merrill was more important than BofA's shareholders taking a hit.

-- William D. Cohan is the author of "House of Cards: A Tale of Hubris and Wretched Excess on Wall Street," published in March by Doubleday Books, a division of Random House, Inc.