At a wholesale price of $2.25, the once costly crustacean is a treat for consumers but a crisis for Maine lobstermen. 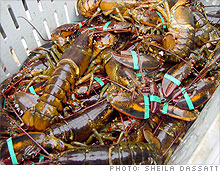 One startup's solution to a global seafood crisis: Farm-raise fish - but out on the open seas.
View photos

NEW YORK (Fortune) -- Looking for an inexpensive change-up for your next backyard barbeque? Try lobster. "Per pound, it's less expensive than hot dogs right now," grumbles lobster-boat captain Mike Dassatt, who fishes the coast near Belfast, Maine, with his wife Sheila.

You won't hear many complaints from lobster-loving tourists in Bar Harbor or Kennebunkport, but the Maine lobster fishery is coping with the steepest price decline in generations. All around the globe, the lousy economy is having a devastating impact on demand for luxury goods, and the Maine lobster may well be the Mercedes-Benz of food.

Restaurant demand for lobster is down 30% to 35%, versus 10% to 15% for other seafood, reports Michael Tourkistas, CEO of Lynn, Mass., seafood distributor East Coast Seafoods. "Lobster is considered a celebration food -- a feel-good food -- and right now people don't have a lot to celebrate," says Tourkistas.

If that weren't bad enough, the implosion of the Icelandic banks, long the dominant lenders to the fishing industry, has reduced funding available to the big Canadian lobster processors, cutting demand further. These processors typically purchase and process more than half of Maine's annual lobster catch before shipping them frozen to restaurants, cruise ships, and supermarkets all over the globe.

On the other hand, the size of the lobster catch is bigger than ever, thanks to excellent oversight of the state's lobster fishery. Maine lobstermen caught 67 million pounds of the crustaceans last year, 4 million more than in 2007 and triple the amount caught 20 years ago.

Of course you don't need a Ph.D. in economics to know what happens when supply is up and demand is way down. The wholesale or "boat" price of lobsters has crashed from a peak price of about $10 a pound in the winter of 2006 -- average prices in recent years have hovered around $4.50 a pound -- to a mere $2.25 today. "We're basically off the charts historically in terms of low prices for this time of year," says John Sackton, a Lexington, Mass.-based seafood industry consultant. (While retail prices vary widely by location, stores in New England have been running specials on live lobster for as little as $5 or $6 per pound.)

Add in the high price of diesel fuel and the rising price of herring that lobstermen use as bait -- herring has doubled in price since 2007 -- and the end result has been a kind of economic Nor'easter for the Maine lobstermen. They're now losing money on every lobster they catch.

"Put it this way -- yesterday we spent $70 on fuel, $60 on bait and came home with $70 worth of lobsters," says Sheila Dassatt, herself a fourth-generation Maine lobsterman. ("Lobster-person" has yet to catch on with Mainers, perhaps because it sounds likes a creature from a gender-neutral horror flick.)

Local experts think lobster prices are headed even lower because the peak season for lobster fishing -- mid-August through late October -- hasn't even begun. Once those late summer and fall lobsters start hitting the docks, the fear is the new supply will crash prices even further in what's already a glutted market. "I have a strong feeling you'll see prices drop another 50 cents a pound," says Edward Hennessey Jr., president of northern Maine's Machias Savings Bank.

Some lobstermen worry that wholesalers will refuse to pay any price for their catch. To some extent, it's already happening. Drive the roads of coastal Maine, and you're likely to see roadside stands where lobstermen -- fed up with what they consider lowball prices from wholesalers and processors -- try to sell their lobsters direct to consumers.

Hennessey says he hasn't yet had to foreclose on any lobster boats on account of the economy, but he's worried. "Who knows what will happen?" he says.

What's a lobsterman to do? To an outsider, the obvious answer would be to stop fishing and just wait for lobster prices to bounce back. When asked why she and her husband continue to fish when they know they're losing money every time they leave the dock, Sheila Dassatt laughs.

"It's a good question," says Shiela Dassatt, who also serves as executive director of Maine's Downeast Lobstermen's Association. "Most of the fishermen in Maine are self-employed and have been for generations. The average age for a fisherman is about 54 years old. This is all they know, and at this point it's kind of like teaching old dogs new tricks -- myself included." Dassatt is 54.

One concession the Dassatts have made is leaving their traps in the water for a day or two longer and thus making fewer trips. They've been catching more lobsters per trap but using half as much fuel.

But all that does is buy the Dassatts and other lobstermen some time. What they really need is a turnaround in demand, and everyone in the industry seems to believe that starts with changing the way lobster is marketed to consumers.

"Lobsters are a happy food -- something you have for your anniversary or to show off to your girlfriend -- and it's been promoted that way forever," says Albert Carver, who owns five lobster pounds on northern Maine's Beals Island. (A lobster pound is a fenced-off cove used to store caught lobsters in their natural habitat.)

"Nobody goes to the supermarket with lobster on their list," Carver says. "Steak could be $8 a pound, and they're still going to buy it because it's on their list." The way to get lobster on the shopping list, he says, is by moving lobster down market -- from the lobster tank to the frozen food aisle -- and making cheaper, frozen lobster as widely available as frozen shrimp or salmon. "If we're going to win the market back," he says, "it's going to have to happen with price."

The next seafood frontier: The ocean