Can you get promoted now?

Maybe. But the recession has changed some of the rules of the game, so beware of mistakes you may not even know you're making. 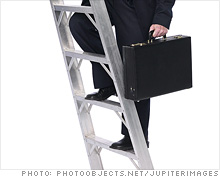 NEW YORK (Fortune) -- Dear Annie: I work as a senior manager on some projects that are showing strong returns. I haven't been here very long, so I'm still trying to figure out the politics, but I'm pretty sure I'm due for a promotion to the next level -- or at least, I need to start planning how I'll get to that level. How do I make a case for my promotion? And how should I seek out my boss's honest opinion about what I need to do to move up? -- Politically Perplexed

Dear Perplexed: The short answer to both your questions is: very, very cautiously.

Let's start with the basic premise of a book you really should read called "Who Gets Promoted, Who Doesn't, and Why: 10 Things You'd Better Do If You Want to Get Ahead" (Ten Speed Press, $14.95), by longtime executive coach Donald Asher.

Asher wrote this book because, in his 20 years of coaching and in hundreds of interviews with human resources managers and with corporate superstars who have been promoted over and over again, he came to the conclusion that most of us really don't understand how companies make decisions about who moves up -- and who doesn't.

"One of the big myths is that you can 'earn' a promotion," says Asher. "In truth, your past and present performance do have to be great. But that in itself is not enough to get you promoted." Why not? "Nobody cares as much about what you've done in the past as they care about what value you can add in the future, which may call for a different set of skills. Then there's the relative cost of promoting you versus bringing someone in from outside," Asher explains. "The fact that your current projects are going well is great, but it's only one of many pieces of information higher-ups will look at when they're deciding who goes to that next level."

Just as important as your performance, if not more so, is "the company's perception of the benefits of leaving you where you are, weighed against the risk of moving you."

There is a paradox here, of course, and it's one that the recession has made even more complex. It's this: You have to be stellar at your current job before you get on the radar screen for a bigger role, but if you're too good at what you're already doing, it's easier and safer to let you keep doing it than to promote you.

If the next level up requires skills and experience that are easy to find elsewhere -- and with so many talented people unemployed now, that's not uncommon -- it's tempting for decision-makers to hire someone else to fill that next job up the ladder. That way, in these times when efficiency is key, the company has to make only one staffing change (the new person) instead of two (promoting you and replacing you).

And here's where it gets really tricky. Before the economy went into the dumpster, Asher notes, he used to advise people not to become so adept at their work that they became indispensable. "If you have created a feathered nest with your personal stamp on every aspect of what you do, staff that is loyal only to you, procedures that are known only to you, and so on, dislodging you could be too disruptive, so you're unlikely to get promoted," he says.

Ah, but these days, you're also less likely to get laid off.

So the challenge you face is: How do you become indispensable enough to keep your job, but not so deeply embedded at your current level that no one can picture you at a higher one? (Are you sorry you asked?)

Asher has two suggestions for you, and for anyone else pondering this quandary. First, keep a password-protected "running brag sheet" on your computer desktop and add to it every time you do something good -- solve a problem, cut a cost, achieve a goal, improve a process.

"People tend to undervalue or forget their own accomplishments, so keep careful track of yours," he says. Odds are that you will be surprised, when you analyze this tally in a month or two, at what it reveals about skills you may not fully appreciate right now.

And why is that important? Ah. Because, when you do sit down with your boss for a chat about your career prospects, you aren't going to ask how to get promoted. That smacks of dissatisfaction with your current position, and it isn't the note you want to strike right now.

"In this economy, employers are keeping lists of restless, dissatisfied employees, and you don't want to get on that list," Asher says. "You want to be a happy, contented worker."

What you do want to ask your boss is more like this: "How can I contribute more? What more could I be doing to help you reach your goals?" With your brag sheet in mind, if not literally in hand, talk about some of the things you've done lately that called on skills your boss might be able to use more of.

But will doing more, and contributing more, eventually lead to the promotion you want? Perhaps. "If you play it right, a recession like this one is a proving ground," he says. "Companies tend to consolidate functions, staffs, and budgets, so if you start accumulating more of those, it's a chance to show what you can do with bigger responsibilities." For anyone hoping to move up, that's never a bad thing.

Talkback: Is your company handing out many promotions right now? If you've gotten one lately, why do you think you were chosen? Would you be willing to move to a different company for a bigger job, or are you staying put? Tell us on Facebook, below.

Dare you ask for a raise now?

When e-mail comes back to haunt you