Help! My boss is driving me nuts

When a control-freak boss is in charge, you and your co-workers may be tempted to rebel. Here's a better strategy.

Paste this link into your favorite RSS desktop reader
See all CNNMoney.com RSS FEEDS (close)
By Anne Fisher, contributor
August 28, 2009: 3:58 AM ET
Sign up for the Ask Annie e-mail newsletter 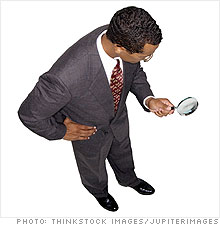 (NEW YORK) Fortune -- Dear Annie: We used to have a great team here, until our boss was replaced by a manager brought in from another part of the company who is now trying to control our every move. He insists on telling everyone what to do and how to do it in minute detail (even though we've all been excelling at our jobs for years). No detail is too ridiculously tiny to escape his scrutiny, and he's constantly issuing new rules and guidelines, some of which contradict each other.

As a result, some of us are just taking the passive-aggressive approach and ignoring him, which means he bears down harder on the whole group. I could give you examples that would curl your hair, but the point is, it's driving us nuts. Is there anything we can do to change his behavior, or do we just grin and bear it until the next boss comes along? -Gritting My Teeth

Dear GMT: Ah, the control-freak boss. We've all had one, at one time or other. "Overly controlling managers are one of the main types who make employees rebel," says Albert J. Bernstein, Ph.D. (www.albernstein.com), a clinical psychologist for 35 years and author of a terrific new book called Am I The Only Sane One Working Here?: 101 Solutions for Surviving Office Insanity (McGraw-Hill, $16.95).

A big chunk of Bernstein's consulting practice comes from senior managers, urged by teams like yours to get rid of a control freak, who just don't know whom to believe. So they call Bernstein in to sort out the situation. "Even the worst micromanagers usually don't realize they're overly controlling," he says. "They think they're just controlling enough."

Talkback: Do you work for a micromanager? Leave your comments at the bottom of this story.

The cause of their delusion? "These are very frightened people. They are terrified of making a mistake, or of having someone else's mistake reflect badly on them," says Bernstein. "Consciously or not, how they view the world is, 'If I don't control every little thing, something terrible is going to happen.' "

Recognizing that fear is the key to taming it, Bernstein says. He recommends that you and your colleagues try these steps:

1. Don't let your annoyance show. "Calling someone a control freak, or getting visibly irritated when he leans on you, will only make him think he needs to keep an even closer eye on you," Bernstein says.

And don't even think about trying to discuss the problem: "Forget trying to talk a micromanager out of being one. Even seasoned therapists have trouble convincing the control-obsessed that their behavior might be causing more problems than it's solving."

2. Use reassurance, not recrimination. Take the time before a project begins to get a clear and concrete outline of what your boss wants, when he wants it, and how he wants it done. "Take copious notes," Bernstein says. "There are two reasons for doing this. First, if you look as if you're taking his instructions seriously, he'll worry less about you making 'mistakes.' " And second, if you establish - in writing - a specific, measurable result to be delivered at a specific time, it will come in handy later on when your boss tries to control the process - which of course he will.

3. Give progress reports before he asks for them. "Nothing allays a control freak's fears like excess information," says Bernstein. "Remind him that you are taking the project as seriously as he does."

"Needless to say, for this strategy to be effective, you need some history of delivering the goods," he adds. You and your teammates have such a history, right?

5. Keep up the good work. According to Bernstein, if you follow these steps several times - once is not enough - and actually do what you say you're going to do when you say you will do it, your boss will become less worried about your performance and go off to fuss over somebody less responsible.

Meantime, try not to overreact to your wacky boss, Bernstein cautions. "People often respond so viscerally to an over-controlling boss because of their own inner teenager - you know, that voice inside that reacts to overbearing authority with, 'You're not the boss of me,' " he observes. "It's a sort of knee-jerk resistance to arbitrary or unreasonable control." That voice is louder in some folks than in others, he notes, but "I always counsel people not to let their inner teenager make career decisions for them." Noted.

Talkback: Do you work for a micromanager? How do you deal with it? Sign on to Facebook below and tell us.

6 ways to be happier at work