A reporter is embedded in a unit headed for Iraq and returns with a book about the conflict that's impossible to put down. 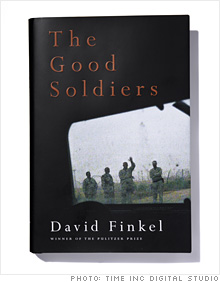 (Fortune Magazine) -- Let me be direct. "The Good Soldiers" by David Finkel (Sarah Crichton Books/FSG) is the most honest, most painful, and most brilliantly rendered account of modern war I've ever read. I got no exercise at all the day I gulped down its 284 riveting pages.

Early in 2007, Finkel, a Washington Post reporter, embedded himself with the Second Battalion, 16th Infantry Regiment of the Fourth Infantry Brigade Combat Team, First Infantry Division -- colloquially, the 2-16. Its 800 men and women were among the troops who were meant to stabilize Iraq. They were a wave in the surge.

Finkel billeted with the 2-16 for eight months during its deployment and visited some of the troops on several occasions after their return to the U.S. (too often in military hospitals). His closeness to the officers and enlisted personnel is evident in the book's intimacy with the terror and death that haunt their lives and with the bravery and brotherhood that exalt them.

That's not the only paradox in "The Good Soldiers." The figure at the book's center is Lt. Col. Ralph Kauzlarich, whose optimism, compassion, and basic human decency, one learns, are entirely compatible with his unblinking love of combat. Some of his greener soldiers, a few as young as 17, demonstrate breathtaking maturity. Intelligent and well-meaning people studiously developed the 2-16's counterinsurgency tactics, but on the evidence presented here their labors were futile.

That assertion should not suggest that this is a political book. There isn't a polemical sentence in it. If Finkel's prose gets a little theatrical at times, it's only because the events he describes span the dramatic spectrum, lurching from the grimly comic to the inexpressibly tragic.

When I'm reading a book for review, I note on the endpapers the page numbers that will lead me back to material I might want to quote or cite.

In Finkel's book, the annotations come in bunches: teenagers filling out forms before they leave for Iraq indicating what personal effects they want to be buried with. A hysterical Iraqi woman running toward a 2-16 platoon with a blanket-wrapped bundle in her arms, the soldiers at first fearing it's a bomb and then, almost too late, discovering it's a badly burned child. Explosive devices propelling a flattened metal disk at such velocity that it can -- and does -- slice a man's body in half.

Yet my copy of "The Good Soldiers" also shows that at times I went 30 or 40 pages between annotations. That's because I was caught in narrative passages so compelling I simply couldn't stop to make notes. It's that kind of book. Read it.

Can Jordan build on its relative success?

Condi: The should-be face of the GOP