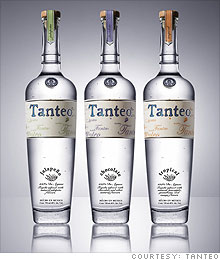 NEW YORK (Fortune) -- Drenched in sweat, Jonathan Rojewski stood in the middle of the agave field in Tequila, Mexico -- his skin burned from hours in the sun and his throat scratchy from the arid, dusty ground. He could no longer lift his arms. He had been wielding a traditional 20-pound coa (a large machete) the entire day, trying to cut down the big and fibrous agave -- the plant that Tequila is made from.

As exhausted as he was, Rojewski knew this would be the easiest part of his next endeavor. Just a few months earlier, he had left his cushy, well-paid desk job as a hedge fund manager -- to start his own Tequila company, Tanteo.

"You can't have realistic expectations when starting a business unless you do it yourself first," he says. "That's why I went to the agave farms. I wanted to ensure Tanteo was of the best quality."

You'd think last year's Wall Street woes would have led Rojewski to Tequila for other reasons, but it was his uncultivated passion for the culinary world that brought him to Tequila. Rojewski isn't just making tequila, he's reinventing it -- making the spirit flavor-infused.

"I saw the New York cocktail culture start to pop," Rojewski says. "Flavor-infused Tequila hadn't been previously done. And I knew if you do this right, you can be the market leader. You can become the standard."

So Rojewski left the financial industry after a decade of climbing the ladder from analyst to hedge fund manager -- working at the likes of Goldman Sachs, Oppenheimer, and Pequot Capital.

And for what? To start a Tequila company named Tanteo, which not only means "test" in Spanish, but also "score" -- or as the Tanteo team likes to interpret the word, "succeeding."

The move left some of Rojewski's Wall Street buddies -- many of whom are still working in the finance world today -- baffled.

"It surprised me," says former colleague Greg Gordon, who's now a managing director at Morgan Stanley. "He was good at the job. I didn't think he would take the risk and start his own company."

But for Rojewski, it wasn't a risk. It was what he always wanted to do. While he studied financial analysis and entrepreneurship at Baltimore's Loyola College, Rojewski also trained in the kitchen. He left the culinary world after his mentor died, and focused on going to Wall Street, but he knew that wasn't right for him.

"The finance world was never a destination for me," he says. "It was a means to an end."

Tanteo investor Matt Breidert -- also a former coworker -- agreed, saying that Rojewski "was a lot more social that those in the finance world," even networking outside of Wall Street. It's the connections Rojewski made then, says Breidert, who is a portfolio manager at Ecofin, that are serving him now at Tanteo.

"He's got a leg up," Breidert says. "Lots of businesses starve because they don't have a reasonable Rolodex. I knew Jonathan wasn't going to have that problem."

After three years working to develop the perfect Tequila formula, Rojewski came up with three flavors: "Jalapeño" (the most popular), "Chocolate," and "Tropical." With investors on board and the production cycle in Mexico finalized, Tanteo launched in December 2008, in the midst of the financial crisis.

That didn't stop Rojewski, though, who Breidert says used "guerilla tactics" like walking from bodega to bodega in New York City to pitch Tanteo to vendors.

And it's this personal attention, combined with his contacts and knowledge of the finance world, that has possibly led to Tanteo's success. The company has already secured 150 accounts -- including trendy New York Mexican restaurants such as Dos Caminos and La Esquina -- and is expanding along the Gulf Coast, to the West Coast, and potentially abroad.

La Esquina currently uses Tanteo in two drinks, and according to Kummi Kim, beverage manager at La Esquina, the response has been overwhelming. "People love it," she says. "It's totally different. Jonathan's made a product that's unique. He's made Tequila approachable."

At the Thompson Hotel, the bar goes through eight Tanteo bottles a week -- enough for 170 cocktails.

Tanteo raised $2 million in the past three years and has already sold most of the 4,000 cases of Tequila the company made during its first production cycle. Rojewski's currently looking for additional funding to continue producing Tanteo for the next two years. Now, all Rojewski wants is his own version of luck.

"My definition of luck is where opportunity and preparation meet," he says. "My biggest hope is Tanteo will grow into a brand that will become a household name.... I'm here to build a lasting franchise. Here's to the best."