WASHINGTON (CNNMoney.com) -- The largest stimulus program in the nation's history is starting to move into a new phase: Out with the rescue, in with new spending to create jobs.

Top White House advisers said Wednesday that most of the economic stimulus spent so far has helped prop up the states, paying for food stamps, Medicaid and filling budget gaps that kept police officers, firefighters and teachers employed. 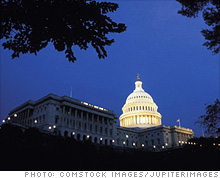 In 2010, most of the remaining recovery spending will be funneled into projects that build roads, lay high speed rail, install broadband in rural areas and fund research at health institutions.

White House economist Jared Bernstein acknowledged that most of the jobs created or saved so far have been public sector jobs. One of the largest areas of jobs saved so far included some 300,000 teachers that kept their jobs.

Private sector jobs are next

Bernstein said he is confident that new spending will create more jobs in the private sector.

"The private sector US economy will begin generating robust employment at some point in the near future," Bernstein said. "Precisely when that is no one can say. But what we can say is that point is a lot closer because of the Recovery Act."

In the past few weeks, the White House ramped up its message that it's tackling the top economic worry on Americans' minds: jobs.

The $787 billion stimulus package was passed in February, along party lines, in part to help stem job losses. But it remains a political flash point on Capitol Hill, with Republicans criticizing its impact.

On Wednesday, top White House advisors briefed reporters on the progress and future of the stimulus package. They maintain that stimulus is working to curb job losses, although they acknowledge it still has a ways to go.

"Is it fully offsetting the job market impact of the deepest recession since the Great Depression? Bernstein asked. "Of course the answer is no. But the Recovery Act is helping to offset some of that pain."

As of Dec. 4, the federal government had either spent or was on the verge of spending $301.7 billion of the stimulus package, in addition to $93 billion paid in tax relief, said Edward DeSeve, a special White House adviser on the economic stimulus package. That leaves about $392 billion remaining.

He denied the call for more spending is a second stimulus proposal and called the new push for spending on infrastructure and programs to help homeowners make homes conserve less energy "targeted."

Help Desk
Track testing tires to find the best
Find out how TireRack tests and reviews tires and why choosing the right ones for your car is so important. Play
Markets
Data as of 11:47pm ET
Data as of Jan 17
Sponsored by
Sponsors
Sections