Do we have the right investment mix? 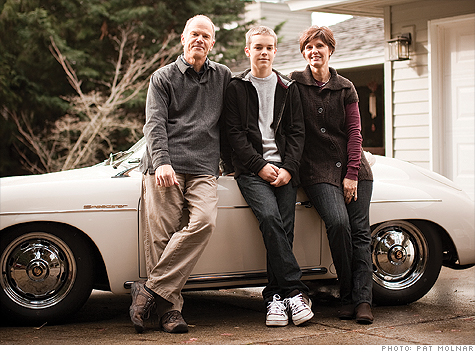 (Money Magazine) -- Richard and Cheryl Ebers began their married life together just nine years ago. She was divorced and raising two sons (now adults); he was a widower with a young boy of his own (Eric, now 13 ).

Richard was a diligent saver from way back, regularly socking away money in his 401(k) and consistently putting away $500 of Eric's monthly Social Security survivor benefits for his college fund.

Cheryl admits to being a spender previously, but has since zeroed out her credit card debt and opened her own IRA. "Being married to Richard has made me more conscious about saving," she says.

Together they now have almost $500,000 for retirement, and $39,000 for Eric's college education. But while they keep shoveling money in, they rarely revisit their investment decisions. "I haven't made any changes to my portfolio in 10 years," says Richard. As they start closing in on their retirement and Eric's high school graduation, they're wondering whether they still have the right mix.

The couple's set-it-and-forget-it strategy is especially dangerous in such a volatile market, says Portland planner Tim Kober. Because of their inertia, the Eberses are now 84% in stocks, far too aggressive for their ages. Another market crash could devastate their retirement dreams, which include Richard's building an airplane and taking flying lessons. (As is, in a more appropriate 60%/40% allocation, they'd have lost roughly 22% in 2008 vs. the 30% or so they did.)

Counting Richard's modest pension, Kober estimates that the Eberses need $1.4 million to maintain 80% of their current income once they retire. Assuming a 6% average annual return - on a more conservative portfolio - they can get there at their current rate of savings ($12,000 a year). But they must be sure to ratchet down risk as they age, says Kober. Eric's college fund should cover a chunk of his education, the planner adds, but this too needs monitoring.

CURB RISK. The Eberses should reduce their equity allocation to 54% and boost fixed income to 40%, focusing on investment-grade bonds, Kober says. By retirement they should be 55% in bonds.

MIX IT UP. The Eberses are mostly in large-cap U.S. funds. To diversify, Kober suggests they put 24% in international funds like Vanguard FTSE All-World ETF (EFV), 5% in the Vanguard Small Cap Value Index (VBR) and 6% in a REIT fund.

REVISIT REGULARLY. The couple need to rebalance at least once a year to stay on target. They should take advantage of automatic rebalancing offered by Richard's 401(k).

KEEP COLLEGE FUNDS SAFE. The college kitty is 100% in stock funds; but with Eric now 13, the Eberses should begin dialing back equities to 50%. By the time Eric is 18, the mix should be 60% bonds/40% cash. For new savings, they could join Oregon's Vanguard 529 plan, and choose an age-based portfolio, which automatically makes such transitions.