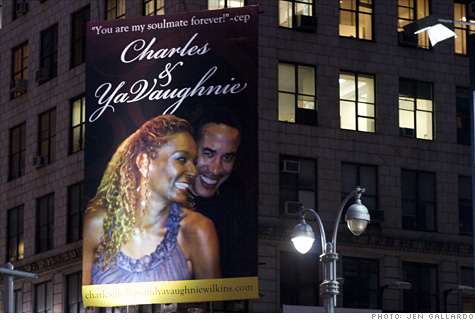 The supersize ads feature him and his mistress, beaming and canoodling. A Web address listed on the billboards, charlesphillipsandyavaughniewilkins.com, directed viewers to a site, which is no longer running, filled with photos and notes documenting a romance dating back to 2001.

"I had an 8½-year serious relationship with YaVaughnie Wilkins," Phillips said in a statement released Friday by Oracle's public relations team. "My divorce proceedings began in 2008. The relationship with Ms. Wilkins has since ended, and we both wish each other well."

Phillips, 50, is reportedly still married to his wife Karen, and the two have a son together.

Wilkins declined to speak directly to the media, instead fielding requests through her cousin Misha Davila, who told CNN that Wilkins thought Phillips' divorce was finalized in 2003.

Davila said Wilkins created the Web site, which apparently launched in October, as a gift from Wilkins for Phillips' 50th birthday. She said the billboards were an attempt by Wilkins to reclaim her version of her relationship with Phillips-- not an act of revenge.

Phillips, who has served on President Obama's economic recovery advisory board since last February, joined Oracle (ORCL, Fortune 500) in 2003. Prior to joining the business software giant, he worked as a tech industry analyst at Morgan Stanley and served as a captain in the U.S. Marine Corps.

Often talked of as a potential successor to Oracle founder and CEO Larry Ellison, Phillips is one of the software company's most senior -- and highly paid -- excecutives. On top of an $800,000 salary for 2009, he took home stock options and other compensation valued by Oracle at more than $18 million.

Clash of the technology titans