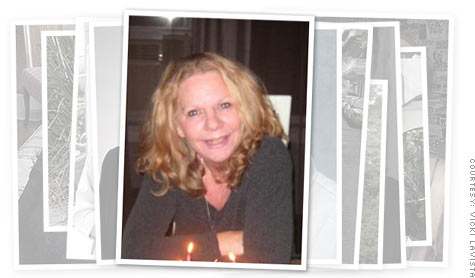 NEW YORK (CNNMoney.com) -- Ever applied to a job online only to have your résumé seemingly vanish into a void?

From crafting a winning cover letter to acing an interview, landing a job is tough enough in this market. But millions of job seekers can't even get a foot in the door as they apply to countless positions and seldom hear anything in response.

"I've been looking since September. I send out résumés and nobody answers me," said Vicki LaVista, 56, a former executive assistant who has not had any luck on the job hunt. "It's already February and I don't even have a bite," she says.

LaVista estimates she applies to about 100 positions a week on sites like CareerBuilder, Monster and Craigslist, but never receives so much as a rejection form letter.

"I'd rather get feedback than no feedback. It would be better to hear 'we hate you,'" she said.

LaVista's experience is pretty typical these days -- job seekers are feeling frustrated by the sheer lack of acknowledgement.

But what happens to all of those carefully crafted résumés?

The ease of free online job sites has boosted the number of candidates applying for each opening. With hundreds, or even thousands of people competing for the same jobs, most hiring managers are inundated with candidates and many of them simply get lost in the shuffle.

"The good news is, as a job seeker you have hundreds and hundreds of jobs in front of you," said Dave Sanford, executive vice president of client services for staffing firm Winter, Wyman. "The bad news is, because everything is so out there, it's also incredibly available to everybody."

Gone are the days of the thoughtful response to a classified job posting in the newspaper, Sanford said. "Now it's so easy just to send your résumé everywhere and blast it all over the globe."

Because recruiters and hiring managers are bombarded with so many applications, there is less opportunity to send responses to everyone who applies, he explained.

Even recruiters admit that they are unable to handle the influx of applications they receive to a single job listing.

"I posted a position for an executive administrative assistant on a Friday and came back to work on Monday and we already had 400 people that applied," said Dionna Keels, a senior corporate recruiter for a large privately-owned company in Atlanta. "I took the job down on Monday and started going through résumés."

To avoid getting overlooked, experts recommend that job seekers apply to positions for which their background and experience is a good fit and tailor their application to each posting.

"People have to think about a way to separate themselves from this pile of garbage that sits on someone's desk," said Sanford. He suggests finding out who is responsible for hiring at the company and contacting them directly or following up with a phone call.

"Sending me a message through LinkedIn helps differentiate job seekers from the mass of applicants," agreed Keels.

To help handle the onslaught, résumé screening software or questionnaires included with applications will also filter out many online submissions before they even reach a hiring manager's inbox.

"A lot of times, when you go to apply for a job there will be a questionnaire at the beginning," Keels explained. "If you don't get 100 on those questionnaires then you've probably been screened out." She estimates that at least 50% of applicants to the jobs she posts are screened out right off the bat.

Even seemingly innocuous questions like, "are you willing to work weekends?" can take a job applicant out of contention, added Shawn Boyer, CEO of SnagAJob.com, a job search site.

Being as amenable as you can on the questionnaires and using the right keywords on your résumé will boost the chances of getting through to an actual person, the experts say.

Paul Forster, co-founder and CEO of job search site Indeed.com, recommends listing all specific skills and software instead of saying, for example, "Microsoft Office products." He also suggests using full names as well as acronyms such as "pr" and "public relations" and synonyms like accounting, accountant and accountancy.

For job seekers, timing is also key. Those who didn't apply to that position Keels posted over the weekend weren't even in the running. "We will typically go in chronological order," she explained of the review process, which means those that apply first are at an advantage. "Once we find 3-4 strong people we'll start with them."

Looking at a date that a position is posted is often a good reference point, because openings that are more than a few days old may already be filled.

On job boards, positions may be listed for 30 or 60 days even though the hire is made on day five, Boyer explained. But because of the contract "that position could still be posted for another 25 days," he said. "It's incumbent on the hiring manager to [have the post taken down] but a lot of times that doesn't happen."

Alternatively, some employers post "evergreen" jobs, usually for a position with a high turnover rate, even if it's not necessarily available at that time.

And some postings are not really available at all if there's an internal candidate already slated to fill the slot. Companies will often go through the motions of advertising the job and accepting résumés, to prove they are using fair hiring practices and considering external candidates.

Then there are the postings that appear to be for real jobs but are actually scams, which have ballooned in recent years and include a disproportionate number of work-from-home offerings.

Indeed.com's Forster says job seekers should watch out for any listing that prompts you for a payment or solicits your social security number. "If you apply to a job on the company's own Web site -- that's the safest situation," he advised.

I stopped looking for work