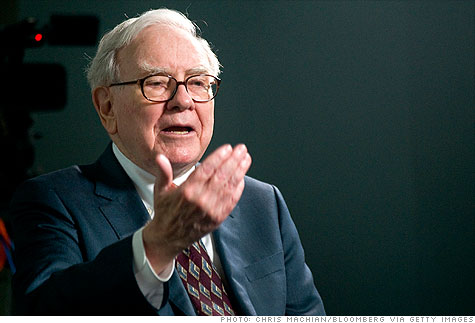 Warren Buffett says it's time for CEOs of too-big-to-fail companies to put their own money on the line.By Colin Barr, senior writerMarch 1, 2010: 11:55 AM ET

NEW YORK (Fortune) -- Warren Buffett has an elegant solution for the thorny problem of too-big-to-fail banks: Put the bankers' bank accounts on the line.

Buffett, the chairman of Berkshire Hathaway (BRKA, Fortune 500), lashed out at the damage wrought by overpaid, unaccountable finance-industry bigwigs in his annual letter to Berkshire shareholders, released Saturday.

Buffett has been criticizing overreaching corporate managers and complaisant directors for decades. But the question of how to motivate good corporate behavior has taken on new weight as Washington debates reining in the financial giants whose missteps brought the economy to its knees two years ago.

The Obama administration last month proposed separating banks' proprietary trading activities from their federally subsidized deposit-gathering and lending ones. Other proposed rules would increase the amount of capital banks hold against losses and how much cash they carry to deal with a surge of withdrawals.

But Buffett said there's a simpler way to cap risk-taking: Forcing lavishly compensated CEOs to take responsibility for assessing the risks at their firms -- and putting their own wealth at stake, to boot.

"It is the behavior of these CEOs and directors that needs to be changed," he wrote. "They have long benefitted from oversized financial carrots; some meaningful sticks now need to be employed as well."

The comment reflects a theme that has run through Buffett's letters to investors over the years: Shareholders are best served by managers who think like owners. More often, he has said, they are ill served by executives who instead pursue value-destroying mergers or pile up debt in a bid to boost returns.

Buffett, 79, is the controlling shareholder at Berkshire and has received $100,000 in annual salary for the past quarter-century. Since he took over Berkshire in 1965, the company's net worth has increased at a 20% compound annual rate.

So it's no surprise when he heaps scorn on the bankers who made tens of millions of dollars annually as they steered their financial supertankers onto the rocks. The four biggest financial "fiascoes" -- presumably including the bailouts of AIG (AIG, Fortune 500), Citigroup (C, Fortune 500) and Bank of America (BAC, Fortune 500) -- cost investors more than $500 billion, by Buffett's count.

Shareholders didn't cause those meltdowns, but "they have borne the burden, with 90% or more of the value of their holdings wiped out in most cases of failure," Buffett wrote. "The CEOs and directors of the failed companies, however, have largely gone unscathed."

It's bad enough that corporate insiders escaped major financial harm in the bailout debacle. But some even managed to keep their jobs: While Citi and BofA have shaken up their boards, 13 pre-bailout directors remain at the two banks. Vikram Pandit continues as CEO of Citi, while Ken Lewis only recently stepped down as CEO of Bank of America.

Consider too the modest toll paid by the execs who were behind two other major collapses of 2008, former Bear Stearns Chairman Jimmy Cayne and longtime Lehman Brothers chief Dick Fuld.

While both owned sizable amounts of company stock, neither by any means had the lion's share of his wealth tied to the firm. Fuld, for instance, sold nearly $500 million of Lehman stock in the years leading up to the firm's September 2008 failure. And while Bear's collapse cost Cayne $1 billion, he was still worth $600 million after its March 2008 panic sale to JPMorgan Chase.

Thus the bill for the firms' lever-up-and-bet-big strategy was largely borne by smaller shareholders, including many employees, and the taxpayers who must now foot the bill for extraordinary government aid extended later in 2008 to the rest of the financial sector.

Since the crash, the notion that executives should have more skin in the game has become commonplace. Big Wall Street firms such as Goldman Sachs (GS, Fortune 500), which Berkshire owns preferred shares of, and Morgan Stanley (MS, Fortune 500) are now paying top executives largely in stock that must be held over a period of years, in the name of coupling risk with reward.

But officers' and directors' commitment to shareholders must go further, Buffett said.

Boards that don't insist the CEO take responsibility for risk management are "derelict" in their duty, Buffett wrote. And in cases where a failure to act prudently results in government assistance, "the financial consequences for [the CEO] and his board should be severe."