Is your country the next Greece? 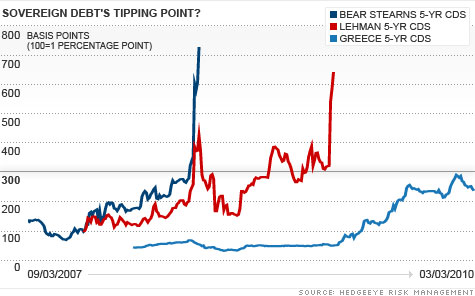 (Fortune) -- Just over a year ago a few members of the research team at Hedgeye attended a lecture at Yale Law School by Robert Rubin, the former Secretary of the Treasury under Bill Clinton. During the question and answer session, Rubin was asked about sovereign risk -- the threat that an entire nation effectively walking away from its financial obligations. Mr. Rubin was blunt: he said categorically that he did not expect any major nations to default on its debt.

Mr. Rubin, as with many astute investors, overlooked the most dangerous macro issue today: the emerging sovereign debt crisis, highlighted right now by the teetering Greece economy. So how do you miss an entire country on the brink? By not employing the correct analytical tools to assess this risk.

Government debt basically comes in two forms: debt that is issued by a government and priced in its domestic currency, and debt that is issued by a government, but priced in another nation's currency. Collectively, these debts are what analysts refer to as the total debt of a nation, or sovereign debt. In their informative book, This Time Is Different, authors Carmen Reinhart and Kenneth Rogoff culled centuries of historical data to show that when debt reaches 90% of a nation's GDP, a warning signal should sound among investors, citizens and governments. (In Greece, for instance, that figure is now north of 100%.)

When my global risk management team analyzes the fiscal risk associated with a nation, we think about risk on the same basis as if we were analyzing a company and its cash flow requirements. First, to assess whether a nation will need to issue debt, we begin by quantifying its income statement, the difference between its revenues and its expenses. If the nation is running a deficit, which occurs when its expenses outstrip its revenues, it will have to fund the deficit either by generating new revenue, cutting expenses or borrowing.

Over the last few years we have had a near perfect storm for the creation of fiscal liability and default risk. A recessionary global economy has led to dramatically reduced tax revenues to fund budgets. In addition, stimulus initiatives, with the objective of increasing employment and reaccelerating growth, cost real money. So, in effect, as revenues decline due to slowing economic growth, nations have actually been ramping up costs, at least in the short term, due to one time stimulus programs.

Since governments are typically reluctant to raise taxes or cut public programs in weak economic times, the politically feasible choice is typically to increase borrowing. The downside: a nation's cost of debt will almost always increase. As a country's interest costs rises there is a greater strain on national budgets. And so the downward spiral of sovereign debt default risk begins. We saw this in spades last week as Greece was forced to issue 5 billion Euros in 10-year bonds at a rate of 6.39%, or 3 percentage points above the Berlin benchmark.

One of the most misunderstood global macro risks in the market today is that of sovereign debt defaults. Many market pundits are brushing off what is happening in Middle Eastern debt, Eastern European banks, and Chinese property stocks as isolated events. Standing still into year-end with that opinion is very risky.

At the time, hardly anyone was discussing sovereign debt. Today there is solid consensus that the issue is a massive one. Indeed, the question I now find myself asking is whether the mainstream is bearish enough.

One of the most interesting metrics to compare is the price of credit default swaps (CDS) for a number of major European nations. A credit default swap is the insurance a lender buys against potential default. The lender will pay a certain percentage of the debt to insure against its default.

While Greece has been in the news due to the size of its economy and its relevance to the Eurozone, a screen of credit default spreads globally (see table) suggests that there are countries that are in even worse shape. Notably, Argentina, an economy of comparable size to Greece, is currently undergoing a debt restructuring. While credit default spreads are only one metric to analyze potential default risk, they are a very important one as they do tell the real cost by large investors to insure against potential default.

Now compare these spreads against Lehman Brothers and Bear Stearns before their defaults. If you look at the chart above, you can see that 3 percentage points is the tipping point. Interestingly, as sovereign debt risk has received more airtime in the business press over the last few weeks, the perceived risk by investors, according to CDS spreads, has abated.

Regardless, if risk of default has diminished in the short term, the countries we have highlighted have long-term fiscal imbalances that need to be resolved. Countries, like people, cannot issue debt in perpetuity without facing the consequences. Walter Wriston, former chairman of Citibank (the same company that Rubin would later chair), once famously said, "Countries don't go out of business." That may be true, but countries with too much debt running large deficits certainly do default.

--Daryl G. Jones is the managing director of risk management at Hedgeye, a research firm based in New Haven, Conn.

The snag in Greece's salary solution