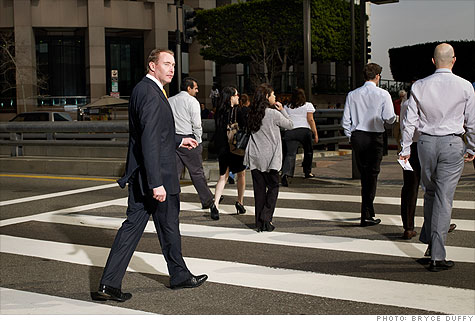 NEW YORK (Fortune) -- On November 19, 2009 Jeffrey Gundlach was named a finalist for Morningstar's award for bond fund manager of the decade. For Gundlach, the nomination recognized 10 years of stellar results, exceeding even the returns of the legendary king of bonds, Bill Gross.

Two weeks later Gundlach was confronted, fired, and then pursued on foot out of a Los Angeles skyscraper by two lawyers working for TCW, the money management firm with $110 billion in assets where Gundlach had worked for 24 years.

Not only did TCW oust Gundlach, but the firm also announced that it was acquiring an entire company -- crosstown rival Metropolitan West Asset Management -- to replace him. That in turn set off a wave of defections from TCW, as 45 of the 60 staffers who had worked for Gundlach streamed out the door to join him at a new firm that he had opened within days of leaving.

Then things really turned nasty. TCW filed an incendiary lawsuit in January accusing Gundlach of conspiring with confederates at TCW to steal proprietary information as part of a long-running plot to form their own competing firm. The suit added a salacious twist of the knife, perfectly calibrated for maximum media interest -- Gundlach had allegedly stashed a trove of illicit material in his office: 70 pornographic magazines and videos, 12 "sexual devices," and several bags of marijuana.

Gundlach has countered with his own lawsuit. He charges TCW and its owner, the French bank Société Générale, with pushing him out so that they can get their hands on his lucrative fees. In addition to his mutual funds, Gundlach had managed what were effectively two hedge funds for TCW, each of which commanded the amped-up fees typical of those vehicles. Gundlach calculates that he would have personally reaped $600 million to $1.2 billion over the next few years.

What in the name of Peter Lynch is going on here? Sure, we've come to expect shenanigans from Wall Street. But even if the mutual fund world hasn't been exactly pristine (remember the market-timing scandals a few years ago?), more often than not its managers and executives have been well-behaved schoolboys compared with the leather-clad (in spirit, anyway) rock stars among the investment bankers and hedge funders.

But unlike most mutual fund companies, TCW has always aspired to a Wall Street culture. In particular, it cultivated a star system. The company grew by importing ambitious money managers and granting them autonomy. They could invest as they liked; TCW would handle sales and marketing. The two sides would then split the fees, with each manager cutting an individual deal. The result could be huge rewards for managers -- Gundlach made $134 million over the past five years -- but some came to view themselves essentially as sole proprietors.

TCW seemed content with the arrangement and did little to tie its managers' fates to the company as a whole. Few of them, for example, received significant stakes in TCW. That bred frustration in multiple generations of standout performers, who viewed corporate executives (some of whom did receive ownership shares) as getting rich off their toil.

So it went for Gundlach, a bona fide investing star who, by the end, oversaw about 70% of TCW's assets, some $70 billion, putting him in charge of one of the biggest pots of money in the country. Gundlach didn't just generate steady returns; he avoided the blowup of the century. A specialist in mortgage-backed securities, he publicly warned in 2007 that "the subprime mortgage market is a total, unmitigated disaster, and it's going to get worse." He invested accordingly, not only delivering positive returns in the blighted year of 2008 but also earning himself a growing role as a media sage. His ego grew along with it.

There are few people like Jeffrey Gundlach in the mutual fund world -- or in any world. A former rock-and-roll drummer, Gundlach, 50, is a math whiz (but not a quant). He views everything in binary terms: Either you perform to his standards or you don't, and he won't hesitate to let you know which category you fall into. Nor is he shy in articulating his view of himself. "I was by far the biggest revenue generator at TCW, by far the biggest performer," he says. "I created $4 billion in value for clients in '09. If telling you that is self-promotion, so be it. It's just a fact."

TCW customers, meanwhile, have been watching the blood feud in disbelief. Investors have fled, with assets shrinking $25 billion since Gundlach was fired. For those who have remained, it seems that their patience is limited. "I'm aware of the investment prowess of both [Gundlach and the new TCW team]," says Mansco Perry III, CIO of the Maryland State Retirement and Pension System, which has $50 million invested in TCW. "But right now I don't believe they're acting in the best interest of their clients."

Read the full story on the poisonous fallout between TCW and Jeffrey Gundlach.