Treasurys look ahead to Fed meeting 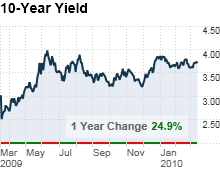 The report, which measures the health of the manufacturing industry in New York state, seemed to indicate a gradual economic recovery.

A separate report out by the U.S. Treasury Department on Monday showed foreigners sold $33.4 billion in U.S. securities, including Treasurys in January -- the reverse of December's $53.6 billion inflow.

China, the largest foreign owner of U.S. debt, reduced its holdings by $5 billion to $889 billion in January. It was the third straight month China traded in its U.S. holdings.

What analysts are saying: Relatively good news from the Empire State Manufacturing Index pushed buyers away from safe-haven trades like Treasurys on Monday, as did the Treasury Department's capital flows data, said Kim Rupert, a fixed income analyst with Action Economics.

Otherwise, Monday was a quiet day for Treasurys; trading tends to deaden out ahead of Federal Reserve meetings.

Investors are looking ahead to statements from the Federal Open Market Committee meeting on Tuesday.

Yellen in line for Fed No. 2

$642 million to clean up Lehman -- and counting