Toyota investigating all its SUVs 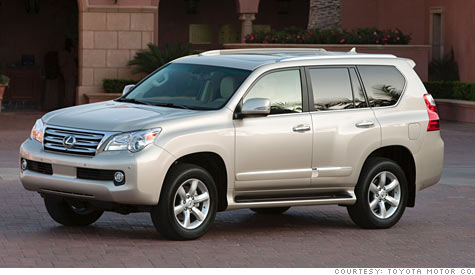 Toyota suspended sales worldwide of its Lexus GX 460 and will halt production for a week.By Peter Valdes-Dapena, senior writerApril 15, 2010: 10:11 AM ET

NEW YORK (CNNMoney.com) -- Toyota has announced that it will now check all of its SUVs for problems similar to the one uncovered by Consumer Reports in the Lexus GX 460 SUV.

The magazine said Tuesday that there was an increased risk of rollover during a turn, a problem it discovered during routine tests. It urged car shoppers not to buy the GX 460 until the problem is remedied. Toyota suspended North American sales that day, and on Wednesday it expanded the suspension worldwide to also cover the Middle East and Russia, the only other markets in which the SUV was available.

Consumer Reports said the problem was unique to the GX 460 and had never occurred in any other SUV by any manufacturer, including the Toyota 4Runner, which shares much of its engineering with the GX 460.

Nevertheless, Toyota said it would check all of its other SUVs, including ones that are entirely unrelated to the GX 460.

Toyota asked dealers worldwide to temporarily suspend sales of the new 2010 Lexus GX 460 while the automaker investigates the issue. Toyota does not plan to suspend the sales of the other vehicles it is testing, said spokeswoman Ririko Takeuchi.

"We are taking the situation with the GX 460 very seriously and are determined to identify and correct the issue Consumer Reports identified," said Mark Templin, Lexus Group vice president and general manager, in a statement.

The special designation given to the GX 460 by Consumer Reports -- "Don't Buy: Safety Risk" -- is rarely given by the magazine. The last time it was used was in 2001, on the Mitsubishi Montero Limited.

About 5,000 GX 460s have been sold in the roughly three months the model has been on sale, the magazine said. It advises current owners of this vehicle to approach exit ramps with caution, and to call Toyota demanding a fix for the problem.

The SUV's electronic stability control program failed to keep the vehicle in line during a severe handling maneuver, allowing it to slide almost completely sideways and that could lead to a rollover, said Douglas Love, Consumer Reports spokesman.

The magazine said in a statement that a rollover accident "could cause serious injury or death," but added that it was not aware of any injuries or deaths caused by the problem.

Electronic stability control (ESC) is a computerized system that controls the brakes and accelerator to help maintain vehicle control in abrupt maneuvers.

The problem with the Lexus' ESC system became apparent during tests designed to detect a specific emergency handling problem -- one in which a vehicle's back end slides outward when the driver lifts his foot from the gas pedal during a turn. The GX's ESC system did not become active until the SUV had already skidded dangerously, Love said.

The test mimics a driver's typical response to encountering an obstacle in the midst of a turn or to finding a turn to be unexpectedly tight.

In the test, the SUV was going over 60 miles per hour, said a Consumer Reports spokesman.

"We're in the process of testing the 2010 Lexus GX 460 SUV to ensure it complies with NHTSA's safety standard for electronic stability control ESC, and to understand better the results obtained by Consumers Union reported today," NHTSA spokeswoman Julia Piscitelli said in a statement. "It is our belief that ESC should prevent the kind of fishtail event described."

The GX 460 was completely redesigned and re-engineered for the 2010 model year. The problem did not occur on Lexus GX models from prior model years.

The National Highway Traffic Safety Administration, the government agency that monitors auto safety in the United States, has no crash test or rollover ratings listed for the GX 460 on its Web site. A NHTSA spokesman could not immediately say if the government has done crash safety and rollover tests on the vehicle.

The problem was also absent during tests of the closely related 2010 Toyota 4Runner SUV, Love said. The 4Runner was also redesigned for the 2010 model year.

Electronic stability control systems have proven extremely effective in reducing dangerous single vehicle crashes. According to separate analyses by the privately funded Insurance Institute for Highway Safety and the Department of Transportation, ESC systems have been shown to reduce the risk of fatal crashes by as much as a third. The systems will be required on all cars by 2012.

Lexus is Toyota's luxury division and the company has been facing a public relations crisis surrounding allegations of unintended acceleration in many of its most popular vehicles. In the past year, the automaker has recalled 8 million vehicles worldwide for safety issues.

GM to expand use of brake override system