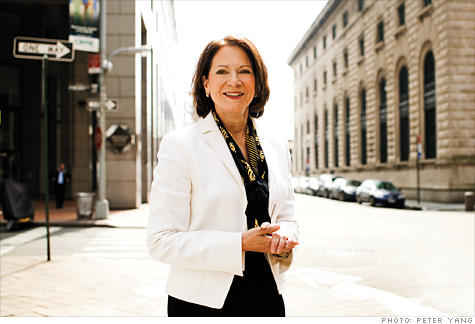 During the financial meltdown of 2008, Rominger, then one of Goldman's top equity mutual fund managers, coordinated emergency strategy sessions with managers across asset classes. Impressed with her leadership, Goldman Sachs (GS, Fortune 500) (No. 39 in the Fortune 500) installed her in the new position of CIO last year, putting her in charge of $214 billion in mutual fund assets and billions more in institutional accounts. She shared her view of the markets with Fortune's Mina Kimes.

You've been a value investor for 30 years. How do you decide whether a stock is attractively priced?

There are two components. We believe in using industry-specific approaches to valuation. So we don't just use price/earnings, for example. If we're going to buy an energy company, we'll look at enterprise value to reserves and then do a lot of work identifying where the reserves are.

The other thing is that we look for "emerging quality" stocks -- companies where there's a kernel of something good, but it's not evident to the naked eye and we think we've assessed it earlier than others. An example would be Dow Chemical (DOW, Fortune 500). We think that it has significant positive catalysts -- such as better cash flow and an improving balance sheet -- which aren't yet fully recognized by the market.

Do you think the U.S. equity market is still a good investment? A lot of investors fear stocks have run up too far.

We see a modest economic recovery, which actually bodes well for the market. It's not a scenario that tees us up for sharp gains. But it's an environment where stocks should do well.

Are there any sectors in particular that look like good deals?

Within financials, we think insurance companies like Prudential Financial (PRU, Fortune 500) have an opportunity for pricing improvement. They can take market share from distracted competitors, like AIG (AIG, Fortune 500), that are exiting large portions of the business.

We also like some of the health-care stocks. That's a bit controversial. Baxter International (BAX, Fortune 500) and Biogen Idec (BIIB, Fortune 500) are ones that are less affected by recent health-care legislation and have steadily improving business practices. We like biotech because it's not exposed to the patent risk faced by Big Pharma.

We're also intrigued by some consumer products companies -- stable ones like Pepsico (PEP, Fortune 500), whose stock lagged in 2009. Last year some of the steady multinational consumer companies underperformed more volatile stocks. But we think they're very well-positioned this year. They're relatively inexpensive and in some cases have good exposure to emerging markets.

What are you avoiding?

We're underweight telecom. We're concerned because at this point wireless penetration is very high. It's about 85% in the U.S. now. There's a lot of competition. Many of the companies in the space are quite leveraged, and they're exposed to a consumer who is quite weak and, in our view, will remain weak over the course of the year.

What about emerging markets? They've run up even more than the S&P 500.

We're extremely positive about stocks in emerging markets. Both China and Brazil sell at lower P/E ratios than the U.S., based on our estimates of 2010 earnings. To us, that represents tremendous value.

We think the secular growth you're getting from the domestic economies in both Brazil and China is a strong factor underlying earnings of companies in those regions. So we're focused on companies with domestic demand such as Brasil Foods, which is a dominant processor of chicken and other foods. We're underweight exporters because we think demand coming out of developed markets will remain weak.

People ask, "Have these markets gone too far too fast?" Remember, they had a very sharp trajectory on the downside. They're off their lows. But rather than looking at how much the indexes are up, look at their valuation. Even India, which has a higher P/E ratio than the others, looks cheap given the underlying growth rate and incredible demographic story.

Fundamentally, we think it is a great environment for credit and high-quality fixed income. That's driven by our views on inflation, which we believe will remain quite low. We think Fed policy is on hold for the rest of the year.

We also think the economic recovery is proceeding in a moderate manner, which is good for fixed-income assets. High yield is also attractive, but it did have a very good year, so selectivity is important there.