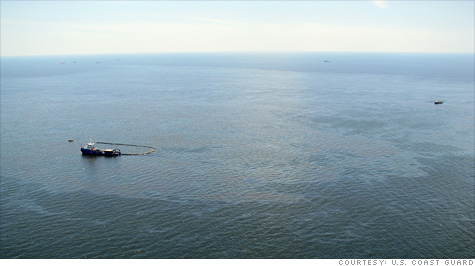 NEW YORK (CNNMoney.com) -- While the search continued Friday for 11 missing workers from BP's sunken oil rig in the Gulf of Mexico, attention turned to fears of a major oil spill.

Such a spill would call into question proposals to open up more areas to offshore oil drilling -- in the Gulf of Mexico and significant chunks of the East and West Coast.

As of Friday afternoon, the Coast Guard said images taken from submarines showed no oil leaks. But reports Friday said efforts to cap the well before the rig sank were not successful.

There are several offshore drilling proposals in Congress, and President Obama has expressed a willingness to grant new leases.

But the plans face opposition from environmentalists and some lawmakers from coastal sates, who fear expanded drilling may result in environmental damage and harm industries like tourism or fishing.

While the oil rig was burning, most of the 4,000 barrels or so a day in oil was being consumed in the fire. When the rig sank, because the well was not capped, any leaking oil could then seep into the ocean.

There is currently an oil slick where the rig went down, but it does not appear to be growing, according to the Coast Guard. It's not clear what is preventing the well from leaking.

If the well does leak more, the environmental and political damage may not be too bad as long as the spill stays offshore. The rig sank about 40 miles off the Louisiana coast.

In a press release Thursday, BP (BP) said it had dispatched 32 spill response vessels to the area, and that wind patterns suggested the current oil slick would stay well away from land.

In addition to being out of the public eye, an oil spill at sea is much easier to clean up and has less of an impact on wildlife. BP said it has plans to move another oil drilling rig into the area to cap the well if necessary, but it's not clear how long that would take.

If large amounts of oil were to turn up on Gulf Coast beaches, the fallout could be much worse.

"Then people in Virginia that like the beach and people in North Carolina that like the Outer Banks will get a first-hand look at the kind of devastation this can wreak," said Dave Hamilton, director for global warming and energy projects at the Sierra Club. "They'll have to decide if they want to take those risks."

It was exactly this kind of spill off the coast of California in 1969 that led to widespread protests against offshore oil drilling, and the eventual ban on the practice in most federal waters.

Supporters of more offshore drilling said Friday that the focus should remain on the 11 missing workers, and not the political repercussions of this accident.

"I certainly hope that Senators don't use an isolated, tragic accident such as this as an excuse to further restrict domestic energy production," said Laura Henderson, a spokeswoman at the Institute for Energy Research.

And might the accident shift public opinion away from more offshore drilling? "Time will tell," said Henderson.

Natural gas: Fuel of the future

Help Desk
Track testing tires to find the best
Find out how TireRack tests and reviews tires and why choosing the right ones for your car is so important. Play
Markets
Data as of 6:16am ET
Data as of 2:44pm ET
Sponsored by
Sponsors
Sections