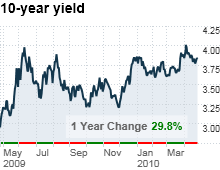 Greece's debt problem has continued to make headlines, as the European Union weighs a bailout to avoid having the country default in May. At the same time, Portugal has begun issuing bonds and selling stakes in state-owned companies in order to reduce its own deficit.

"There's a contagion component, and it does need to be stopped," said Bill Larkin, portfolio manager at Cabot Money Management. "If this keeps snowballing, that will outweigh any progress we're making at home as far as bonds are concerned."

Also, the government sold $44 billion in 2-year notes Tuesday as part of $129 billion in total issuance this week. Investors submitted $133.1 billion in bids. The bid-to-cover ratio, a measure of demand, was 3.03.

"That's poor for a TIPS auction, so there's a little bit of angst on the upcoming supply," Larkin said. "Still, the tailwind from Greece and Portugal are offsetting supply concern."