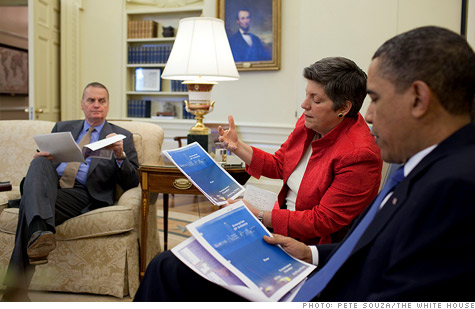 NEW YORK (CNNMoney.com) -- The ever-growing oil slick in the Gulf of Mexico may threaten more than the environment. It will make it significantly harder to open up more coastal areas for oil drilling.

The Gulf oil slick moved within 16 miles of the Mississippi River Delta on Thursday, placing residents from Louisiana to Florida on alert against the possibility of oily beaches, closed harbors and a decimated fishing catch. That makes President Obama's plan to increase offshore oil drilling a much harder sell.

Such drilling is "clearly not clean enough, after what we saw today," Florida's Independent Governor, Charlie Crist -- a former drilling proponent -- told the Miami Herald Wednesday after flying over the slick. "That's horrific, and it certainly isn't safe enough. It's the opposite of safe.''

"The tide has shifted as a result of this spill," said Kevin Book, a managing director at the research firm ClearView Energy Partners. "It will be much harder to open up any new areas."

Last month, President Obama said the federal government would begin the process of leasing some areas off the coasts of Virginia, Alaska and maybe Florida to oil companies for drilling.

New offshore drilling in most U.S. waters had been banned since the early 1980s, when mounting public pressure pushed lawmakers into action. A disastrous oil spill off the California coast in 1969 sparked protests that grew into a broader environmental movement, which eventually succeeded in forcing a drilling moratorium.

The ban was renewed each year until 2008. But that year, public outcry over soaring oil prices made it politically impossible to reauthorize.

"Given our energy needs, we are going to need to harness traditional sources of fuel," Obama said last month. "So today, we're announcing the expansion of offshore oil and gas exploration, but in ways that balance the need to harness domestic energy resources and the need to protect America's natural resources."

But the federal government can't open up new areas for drilling all by itself. It needs the approval of the states where the oil will eventually be offloaded, and whose coastlines would be damaged by any spill.

Virginia is the only state so far that doesn't currently have drilling operations to give the feds the green light.

Book still expects new leases to be awarded, perhaps as soon as 2012. But he predicts that the process, which will include a lengthy public comment period, will now be much more difficult.

Especially given the comments this week from Rep. Frank Pallone, D-N.J.

Pallone announced that he is "adamantly opposed" to Obama's plan to expand drilling.

"Advocates of offshore drilling will have a hard time convincing people along the East Coast that they have nothing to fear from drilling in our waters as they see the oil slick moving through the Gulf of Mexico towards the shorelines of three or four states," he said.

But environmental concerns will have to be weighed against two tough realities: America needs more oil sources, and the federal government needs more revenue. Royalties from U.S. offshore drilling currently contribute $10 billion to $12 billion to the federal coffers each year -- a sum that would rise if drilling expands.

As for Obama's offshore drilling plan, the administration still appears to be moving slowly forward.

"The president's announcement was the beginning, not the end, of a long process," White House Press Secretary Robert Gibbs said, when asked if the spill would affect the President's proposal. "The president does believe that we have to increase domestic production."