The senator who wants to save your retirement 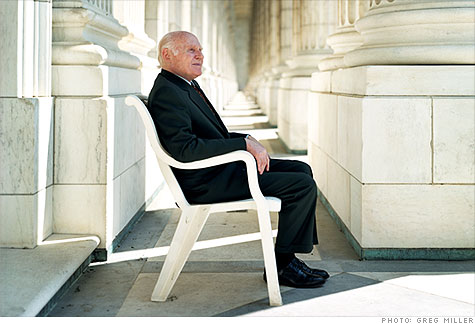 (Fortune) -- The fight over financial reform has made legislators such as Barney Frank and Chris Dodd fixtures in the headlines. Herb Kohl's name doesn't command that sort of attention, but it should: The Democratic senator from Wisconsin has embarked on reforms that could have a profound impact on the lives of millions of Americans. As chairman of the Senate's Special Committee on Aging, Kohl has become Congress's go-to leader on retirement issues.

While his better-known colleagues mud-wrestle over regulating derivatives, Kohl is quietly building bipartisan support for changes that govern how we finance our golden years. "He wants to make sure that people who do care about retirement security are protected," says Bob Corker of Tennessee, the ranking Republican senator on Kohl's committee.

Kohl, 75, is a rare bird in the lawyer-dominated Senate: an honest-to-goodness businessman, one who has actually grappled with his employees' retirement options. Kohl and his siblings transformed their family's local grocery stores into the national Kohl's (KSS, Fortune 500) department store chain. After they sold it, Kohl bought the Milwaukee Bucks basketball team -- where he provides employees with 401(k) plans -- and then decamped to the Senate in 1989. He is now worth $215 million, according to the Center for Responsive Politics.

Right now fixing target-date funds -- all-in-one packages of mutual funds designed for retirement -- is at the top of Kohl's agenda. The issue is urgent because of the products' exploding popularity. According to Hewitt Associates (HEW), about 58% of companies are automatically enrolling employees in 401(k) plans, a number that is expected to grow, and target-date funds are the most popular default investment. Fidelity, one of the largest target-date providers, says 96% of its auto-enrollment plans use them as the default option. The products, which held $15 billion of assets in 2002, have ballooned to $269 billion today and are expected to hold $1 trillion of retirement savings in just four years, according to Cerulli Associates. "A conversation about target-date funds," says Kohl, "is no less than a conversation about the future of retirement."

As someone who was born in 1935 -- the year Social Security was enacted -- Herb Kohl is nearly old enough to have experienced every cycle of retirement in this country, from the eras of fending for yourself (all of U.S. history before Social Security), to the promise of a government stipend, to the happy decades in which a typical retiree could count on a company pension and Social Security, and finally to today's reality, which more and more resembles the old days of self-reliance. "We've become more dependent on ourselves and on investment products," says Kohl. "It's a more complicated and difficult world, so we need to get smarter, more sophisticated, and more knowledgeable to keep up."

In person, Kohl is grandfatherly, solicitous -- he seems to ask more questions than he answers -- even kindly (though also highly competitive, according to staffers and Bucks employees). In his days running Kohl's, he was known to take such an interest in employees that he interviewed every job applicant -- every last clerk and shelf stocker -- even when the company had grown to be a chain.

Kohl is realistic. He knows that making complex, long-term financial decisions is difficult even for veteran investors. That's why, in theory, target-date funds (also known as life-cycle funds) are the perfect retirement vehicle. Rather than forcing the average person to pick stocks and bonds and periodically rebalance his portfolio, the whole kit and caboodle is handled in one package. Target-date funds actually consist of an assortment of stock and bond mutual funds, whose allocations are regularly readjusted: As the investor's retirement (the so-called target date) approaches, the weighting of stocks is reduced, and bonds and other lower-risk assets are increased accordingly.

Kohl began investigating after a staff member noticed that various funds designed for people retiring in 2010 -- which in theory should have been stacked with stable, conservative assets because of the proximity of retirement -- performed noticeably differently from one another in the disastrous year of 2008. For example, the S&P Target Date 2010 Index fund, a benchmark for that date, fell 17% in 2008. The DWS Target 2010 Fund dropped 4%, while the AllianceBernstein 2010 Retirement Strategy fund plunged by 32%, according to fund research firm Lipper.

The reasons for the diverging results are simple: The proportion of stock investments in the funds varied from 26% to 75%, according to investing research company Morningstar. But the high percentage of stock in many cases surprised investors, who thought their portfolios were being downshifted to government bonds, cash, and the like. What the investors didn't realize was that the target-date meant vastly different things to different fund companies, and few of them had made that clear. Some funds were heavily invested in stocks because they had been designed to manage an investor's money for up to 30 years after the target date. This structure assumed that the investor would take out small increments rather than large sums in 2010.

Kohl's committee found other problems. The companies that provide target-date funds -- typically, the same ones that sell the underlying mutual funds -- often stashed unexpected, perhaps inappropriate, investments inside the funds. A high proportion, for example, included junk bonds. Others unloaded their worst mutual funds into the target-date packages. "The things we found were troubling," Kohl says. "The more questions we asked, the more worried we became."

The final slap in the face for investors: Most providers charged double fees -- one for the mutual funds, then a second layer of "wrap" charges to manage the assortment. As a result, research firm BrightScope says target-date fees are 10% to 25% higher than those of other 401(k) options. (According to Morningstar, Vanguard is the only truly low-cost provider, since it uses index funds with rock-bottom fees and doesn't impose those extra wrap charges.)

Oppenheimer's Transition 2010 target-date fund exemplified the problems. It lost 41% in 2008 and was ranked the worst such investment by Morningstar. Of the 13 Oppenheimer mutual funds that made up Transition 2010, two had a four- or five-star rating from Morningstar and five had a below-average one- or two-star rating. One-fifth of the portfolio was in the underperforming Oppenheimer Core Bond Fund, which lost 36% in 2008 (a year in which the average fund in its category lost 8%). It was all exacerbated by the highest expense ratio of any target-date fund surveyed by Morningstar: 1.71% -- in part because many of the underlying funds were actively managed, and thus charged higher fees than index funds. Oppenheimer says it has addressed the problems, altering asset allocation, increasing risk oversight, and making management changes both at the target-date funds and at some of the mutual funds. "Performance has improved, and all of our target-date funds are beating the majority of their peers," the company asserts in a written statement.

At a moment when Congress has played the bad cop, brandishing its billy club at Wall Street executives in contentious public hearings, Kohl has been the good cop, using the implied threat of legislation to encourage the fund industry to clean up its act.

Kohl's soft touch seems to be getting results. Since he began pursuing the issue last year, fund families such as Putnam and Oppenheimer have lowered their fees, and others appear likely to do the same. Sellers have agreed that they need to do a better job of explaining what's in these packages and how they work. The Investment Company Institute, the mutual fund industry's lobbying group, worked with regulators to come up with a set of principles to improve disclosure and created a list of due-diligence questions for the corporate managers who choose 401(k) options.

But for all Kohl's willingness to let the industry reform itself, he knows he can't just leave it to the goodwill of mutual fund companies. He needs a cudgel too. In this case it consists of legislation he is drafting that would deem target-date companies to be fiduciaries under the Employee Retirement Income Security Act (ERISA). That might seem like empty rhetoric -- it simply requires that the companies act in the best interests of their customers. But the real effect is significant: It exposes the companies to costly litigation if they are, say, found to have misled customers about asset allocation.

Predictably, the industry is opposed. Ralph Derbyshire, deputy general counsel at Fidelity, says that fund managers already operate under the Investment Advisers Act, which requires them to manage the underlying funds in the best interests of their shareholders.

Target-date funds aren't the only retirement component that Kohl has been focusing on. Last year he held hearings on the Pension Benefit Guarantee Corp., which revealed a $33.5 billion deficit and led to modest legislation to expand the PBGC's board and bolster the power of its inspector general. And he is the sponsor of a bill that would require the companies that manage 401(k) plans to clearly disclose all of their fees.

Such a law won't make him a cable news idol. But the shaming effect of revealing fees could lead companies to reduce them and save millions for regular folks. How many legislators can say that they did that? It might even be worth a star turn or two.