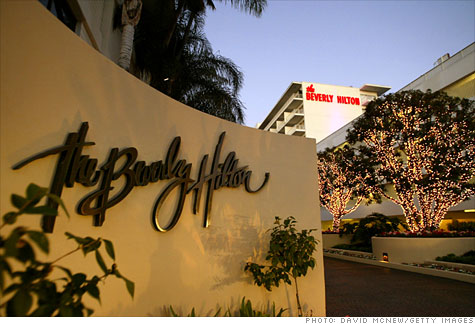 FORTUNE -- During the long years of the financial crisis, the American economy has been like a retelling of the Somerset Maugham story "Appointment in Samarra," in which a man unsuccessfully runs from city to city in attempts to avoid a run-in with Death -- who, of course, is one step ahead of him. Similarly, investors have now spent years dodging disaster in one area of the markets, only to find their investments coming to a bad end elsewhere.

Oddly, however, there is one sector that has been outrunning the reaper since 2007, and it's the last place you'd expect to have survived so long: commercial real estate. For much of 2008 and 2009 CRE was awash in red ink, and yet it hangs on. Richard LeFrak, chairman of the LeFrak Organization, said at the Milken Institute Global Conference in April, "The failure that we were all anticipating in the commercial real estate market, it kind of didn't happen. We blinked, it went away."

The only question now is how long it can keep up the sprint while the ghosts of boom-time leverage haunt the sector, and $1.4 trillion in loan maturities loom three years over the horizon.

To crash or not to crash: Which side is right?

There is a sharp disagreement among experts in how things will play out. Some predict foreclosures, loan defaults and a national crisis of disastrous proportions. In that corner is Elizabeth Warren's Congressional Oversight Panel, which flatly predicted this year that commercial real estate loans are heading for a crash that will bring down small banks, destroy small-business lending and create "a downward spiral of economic contraction," in her ominous words.

On the other side, investors in commercial properties and buyers of commercial mortgage-backed securities believe that the commercial real estate market will continue to suffer until it hits a bottom, but it will never crash in the way that the residential market collapsed. They believe that commercial real estate will be an example of how a market can take the hits and keep on ticking, that not every spot of trouble results in a crisis, that an industry can actually, somehow, stop a crisis if it acts early enough and has enough support.

Peter Roberts, Chief Executive Officer of the Americas for property giant Jones Lang LaSalle (JLL), put it this way: "We're not going to see a 'crash'. We're going to see a long work-through." Roberts believes commercial property values are in the process of bottoming out and will get to the ground floor by early 2011.

He credits the government's support programs in capital markets with reversing the psychology of nervous markets in 2009: "The powers that be are very focused in making sure that we don't have a crash in the real estate market. That has infused the mindset of investors."

Investors are making the most of their good luck while they can. There have already been deals of several different varieties that show us their plan for addressing the problem of high-water mark commercial mortgages coming due.

Of them, there's no better example of temporarily sidestepping the debt monster than Blackstone Group's clutch move with Hilton Hotels. The PE firm's $26 billion buyout of Hilton in 2007 -- with $20 billion of outstanding debt due by 2013 -- is a prime example of the sweaty palms that high leverage deals can cause even savvy investors.

But in April, Blackstone (BX) bought back $1.8 billion of Hilton's debt and restructured another $2.1 billion to turn it into preferred equity. Blackstone also pushed off the maturities of the remaining $16 billion until 2015, buying itself two whole years of breathing room. Hilton is still debt-laden, but it's not dead -- and hedge-fund investors speak approvingly of Blackstone's decisions to face its problems early.

The deal has kicked off a quiet trend of what one real-estate investor at a hedge fund calls "mini-Hiltons" -- a pending wave of real estate investors seeking to buy back and restructure their own debt to stay alive until the recovery.

In another pattern, auctions for distressed assets are becoming more and more competitive, giving troubled assets quick homes. One of the most notable was the acquisition of Corus Bankshare's $4.5 billion real estate portfolio, sold for a mere 60 cents on the dollar in an FDIC auction to a group of real estate investors and hedge funds including Barry Sternlicht of Starwood Capital Group, TPG Capital, WLR LeFrak and Perry Capital. The FDIC kept the majority of the portfolio, but gave the buyers zero-percent financing -- a sweet deal for any investor.

Since properties have become so hard to buy, many investors have turned with voraciousness to the bundles of securitized loans known as commercial mortgage-backed securities, or CMBS. If anything in commercial real estate stands ready for a reckoning, it is these securities.

Despite CMBS hurtling toward higher default rates, however, investors who have faith in them are practicing some serious compartmentalization. They say that there are only some CMBS -- and some tranches of CMBS -- that will be hurt. They believe that the highest-rated tranches, rated triple-A, are in no danger.

They also say that CMBS could never create as much havoc as their residential cousins because of their structure: They are made of whole loans that haven't been chopped up as much in the Wall Street sausage factory, and are based on stronger assets.

The tranches most likely to be hurt, of course, are those with the worst ratings - the triple Bs. These were the biggest victims of lax underwriting standards. According to Commercial Mortgage Alert, the boom years of 2005 through 2007 saw a total of $602 billion in CMBS issuance. (The CMBS written during those three years, by the way, account for a whopping 49% of all CMBS written over the past 20 years.) Those are likely to be the problematic securities. The CMBS written before and after don't have as much leverage put on them, say investors.

CMBS, however, accounts for only about 20% of the total loan market, according to Jones Lang LaSalle's Roberts. The bigger danger to the capital markets -- and to banks -- are speculative commercial loans, like those in construction and land loans. Those aren't backed by firm assets and are a key part of the reason that many smaller banks have failed in recent years. It is these loans, in particular, that worry Warren and others, and could yet bring a reckoning to CRE.

There is a lot riding on the outcome of commercial real estate's do-it-yourself salvation. If the sector can escape the same kind of crash that took down residential real estate, then we have a case study in how investors and government can prevent a crash before it happens. If it doesn't work, however, the economy could be hit again at a moment when it is least able to bear the punch.

An EDGAR for credit ratings data

Help Desk
Track testing tires to find the best
Find out how TireRack tests and reviews tires and why choosing the right ones for your car is so important. Play
Markets
Data as of Jan 17
Data as of 6:49pm ET
Sponsored by
Sections