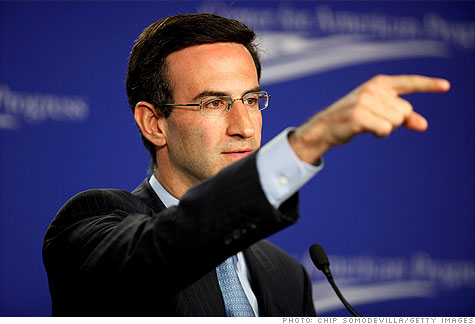 NEW YORK (CNNMoney.com) -- The Obama administration on Tuesday told large parts of the federal government to rein in spending and make better use of taxpayer dollars.

The administration issued new budget guidance calling on non-security agencies to propose ways to cut their budgets by 5%, and called on all agencies -- both defense and non-defense -- to identify their worst-performing programs.

The directives are a means to what fiscal experts say is a very modest end: a three-year spending freeze on non-defense discretionary spending. President Obama proposed the freeze months ago.

The White House estimates that the freeze could save $250 billion over 10 years, or $25 billion a year. That represents less than 1% of the approximately $3.5 trillion federal budget.

The new budget guidance is also intended to help the White House redirect the money saved from the cuts to federal programs that are considered better investments.

"To ensure that we can meet the president's insistence on a freeze for non-security agencies while funding priority areas, we are asking non-security agencies to specify how they would reduce their budgets by 5 percent," White House Budget Director Peter Orszag said in a speech in Washington.

Orszag said the White House won't necessarily seek 5% cuts for every agency when the president puts out his proposed fiscal year 2012 budget in February.

"We're aiming for an overall freeze," Orszag said. "[We'll] plus up some [programs] and reduce others."

Budget experts commended the White House effort, but they also noted that it's a minor move on the road to fiscal health.

"What they are doing is certainly a step in the right direction, but a small step relative to what has to be done to get the budget under control," said Rudolph Penner, a former director of the Congressional Budget Office.

And it's not clear how much money the effort will save because of the difficulties in cutting government spending, said William Gale, a senior fellow at the Brookings Institution. "Various parts of the government have differing and entrenched priorities, so that just having the White House on board does not guarantee that the cuts will occur."

Penner cautioned that the policymakers will have to beware of the "Washington Monument syndrome."

"There is a tendency among bureaucrats to offer their best and most popular programs when asked to suggest budget cuts, knowing then that the cut will never happen," Penner said.

Robert Bixby, executive director of the Concord Coalition, a deficit watchdog group, said the White House directives will usher in "a good process [for the agencies] to go through." But he withheld applause on the deficit-reduction front.

"It is not going to get very far without a follow-up assault on entitlement programs and the tax code."

The fiscal debate: The White House announcement comes in the midst of a debt crisis in Europe that's rattling markets and a big debate about whether now is the time to focus on spurring the economy or reducing deficits.

Noting that there is a near-term jobs deficit and a medium and long-term fiscal gap, Orszag said, "We ignore either of those at our peril."

Even the most hawkish fiscal experts don't recommend immediate deep spending cuts or tax increases because they could compromise economic recovery. Instead they say policymakers should formulate a credible strategy today for attacking the fiscal shortfalls once the economy is on stronger footing.

Try your hand at cutting the country's debt