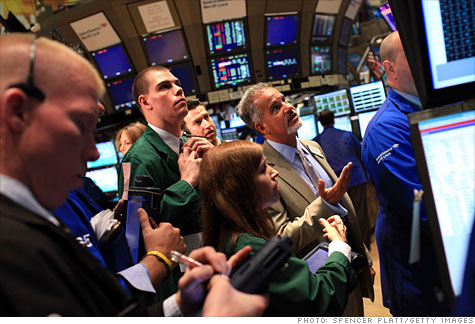 FORTUNE -- Economists, as you have likely heard, are enjoying a bit of a renaissance these days. With a startling new piece of economic news emerging on a near daily basis -- Greece is going under! No, it's Spain! China is in the midst of a housing bubble! China is our savior! -- there's been a surge in demand for those who would purport to tell us what it all means.

If, like us, you don't like your economics dry-as-dust, the man to turn to is David Rosenberg, chief economist and strategist at Canadian wealth management firm Gluskin Sheff. Rosenberg's daily missives (which you can sign up for on the firm's web site) both inform and entertain, while at the same time scaring the bejesus out of you.

Rosenberg, you see, is an unapologetic bear. He's no perma-bear -- the man was a bullish for most of the 1990s -- but his reading of today's data leaves him no choice but to continue sounding the alarm in the face of those who would have us believe the worst is past. We caught up with Rosenberg yesterday afternoon to get his read on Dow 10,000, Ben Bernanke, and the future of gold.

The last several days have been spent crossing and re-crossing what the papers have taken to calling "the important psychological level" of Dow 10,000. Is it important to you? Should it be to us?

Dow 10,000 has absolutely zero meaning, except that maybe it has more zeroes attached to it than any other level we're going to see anytime soon. If you're a real investor, a much more important number is 943 on the S&P 500 which is a 50% retracement of the bear market rally. That's a real technical level, whereas Dow 10,000 is nothing but a number. But you're right -- 10,000, 11,000 or 9,000 are very popular with the media. But anybody who looks at specific numbers is using technical analysis, where there is as much a chance of a zero as any other number.

You make the distinction of a secular bear market versus a correction. Unfortunately, you think we're in the former. Why?

The markets move in primary trends. Just as in life and with the seasons there are cycles when it comes to investing. It has always been such. From 1948 to 1956, there was a secular bull market. From 1956 to 1982, a secular bear market. Then, and this is what most people remember today, from 1982 to 2000, we had a wonderful secular bull market. You can go back further if you like.

The equity market peaked in inflation-adjusted terms in 2000. We had a roughly eighteen-year bull market. And today, we are 60% of the way through a secular bear market. In a secular bull market, corrections are buying opportunities for long-term investors. It's quite clear after the fact that 1987 was one of the best buying opportunities of the last century. Who knew there were thirteen more years to go in the bull run? People who paid attention to history, that's who.

The difference in a secular bear market is that rallies are to be rented and not owned. It doesn't mean you can't have them. We have had rallies of 100% since this one began. But you also have wrenching volatility.

You paid Ben Bernanke a backhanded compliment when you cited his "brilliance as an (academic) economist," and suggested it was time that he "climb down from his ivory tower." You were reacting to his comments on Wednesday, when he said that "private final demand" was finally playing a part in the recovery. You say he's smoking something up there in that tower. What's he missing?

Look, if you put three economists into a room, you would be lucky to get four opinions. Your conclusions are driven by your assumptions. Still, I was very struck by his comment about private final demand. What is he looking at? I see consumer spending sputtering, the housing market turning down sharply, and private payroll growth falling off a cliff. I'm just not seeing what he's seeing. Then again, arguably, he has more contacts than I do. That's why I brought up the comment he made in 2007 that all would be good with the economy, and that the effects of the subprime market would be contained. Beware of brave prognostications.

The Fed's balance sheet has gone from $850 billion in mid-2007 to $2.3 trillion today. Is there any way for this to end other than badly? Say, for example, with runaway inflation?

This is all part and parcel of the post-bubble credit collapse. The Fed has been aggressively expanding its balance sheet, in the process boosting the monetary base. Ordinarily this would be inflationary, but because banks are not relending that money, it has not been. In fact, overall credit is declining. If and when we embark on the next credit creation cycle -- which is probably many years away -- this monetary inflation will probably result in real inflation. But not until money moves off of bank balance sheets and into the real economy.

You don't normally offer up asset allocation advice. But how about giving us some. What would you recommend for an investor today?

Gold is in a secular bull market, but that's a very crowded trade right now. It has moved so parabolically that it could correct 10% without violating any trend lines. Long-term, though, I am sticking with my prediction of $3,000 an ounce.