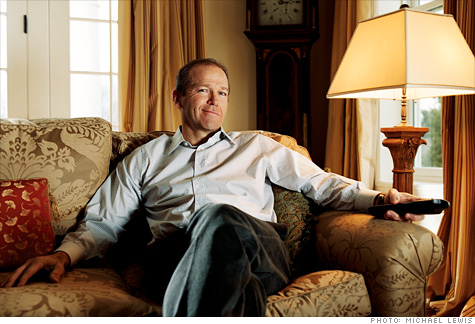 FORTUNE -- What was he thinking? That's what many wondered when David Calhoun left a vice chairman's job at General Electric to run the Nielsen TV ratings company in 2006.

At GE, he managed businesses with revenue of $40 billion. Just months earlier, a Fortune cover story had declared him headhunters' "No. 1 draft pick in the game of grabbing top executive talent, the most lusted-after managerial star who isn't already a CEO." He was getting offers to lead giant corporations, including Boeing. Yet he turned them down and then left GE to head tiny Nielsen (revenue: $4 billion).

What could possibly have enticed him?

Now we know. Headhunters had presumed his Nielsen pay package must have been staggering and that the jump could have paid off hugely. But for now, the most audacious corporate job switch in years appears not to have done Calhoun a bit of good financially -- though he has done just fine, and the story could still take some sharp turns.

The much-sought information on Calhoun's compensation is in Nielsen's recent prospectus for an initial public offering. The company has been owned since 2006 by a group of private equity firms, including the Blackstone Group (BX), the Carlyle Group, Kohlberg Kravis Roberts, and Thomas H. Lee Partners. They were determined to pry Calhoun loose from GE. Here's what it took:

Then, to make Calhoun whole for GE stock options and restricted stock that he forfeited upon leaving, add $20 million, which was to be reduced by his GE severance pay; the net was $18,840,627.

It all comes down to the IPO

He was given six million stock options at a strike price of $10 a share, a price the firm deemed a share's "fair value" at the time, plus another million options at a strike price of $20. (Those share prices likely bear no relation to the eventual price of the IPO shares; Calhoun's shares and strike prices will have to be adjusted after the offering.) We can't use the usual Black-Scholes model to value his options because we have no market data on the stock, but a standard rule of thumb values them at about $20 million; they don't expire until 2016.

That's what he got or was promised just for walking in the door, but as in many private equity employment deals, this one had another side: Calhoun invested $20 million of his own money in Nielsen, buying two million shares at that same $10.

With Calhoun in his new office, it was time to start paying him for actual work. He was guaranteed a base salary of $1.5 million, which has since been increased to $1.6 million. He also gets an annual bonus, which last year was $2.5 million. He receives fairly standard perks, such as financial planning services, car and driver, tax gross-up, and others, which were worth about $135,000 last year.

Let's add it up. That signing bonus is doled out in installments, of which a couple have yet to be paid, but since Calhoun needn't meet any performance targets in order to get the remainder, let's credit him with the whole amount. For the same reason let's also count the whole deferred comp, but we'll ignore the interest that will increase it, since the total will be offset by his GE severance pay, which we're forced to ignore because we don't know it. We have no market data for the value of his stock, but Nielsen figures its shares were worth $11.50 at year-end 2009, so Calhoun had a putative gain of $3 million on his personal investment. Some of his options apparently failed to vest because the company didn't meet performance targets in one year, but Calhoun could eventually earn them back, so let's count all of them.

That's a lot of money, but is it any more than he would have made if he'd stayed at GE (GE, Fortune 500)? He likely wouldn't have made much more or less than John Rice, the highest paid vice chairman since Calhoun left. (CEO Jeff Immelt has been receiving less pay than his top lieutenants during GE's difficult recent years.) Using the same methodology we applied to Calhoun's pay, Rice's total over the same period (mid-2006 through 2009) was about $55 million.

But remember, Calhoun's total includes $20 million to compensate him for stock and option awards he forfeited on leaving GE, while Rice still has his awards accumulated over a GE career of similar length. So it appears that Calhoun is financially almost exactly where he would have been had he stayed put.

The big wild card is the eventual value of his options and stock -- they could be worth far more or far less than we've assumed. The omens are good. If Nielsen's value really has increased 15% during Calhoun's tenure through 2009, as the company's "fair value" estimate says, that's a terrific performance in a period when the S&P 500 dropped 14%. It suggests that Nielsen's private equity owners, who bought the company for $9.5 billion, got more than their money's worth by paying Calhoun as they did. But what really counts is the market's verdict, which the IPO will tell us.

And if Calhoun expected to do much better for himself -- which he presumably did, since in mid-2006 almost no one suspected the worst recession in decades was just over the horizon -- well, he hasn't done badly so far.

Nor is his story even close to finished. When his contractual term at Nielsen ends on December 31, 2011, he'll still be just 54 years old, with the opportunity of plenty more CEO work if he wants it.

Help Desk
Track testing tires to find the best
Find out how TireRack tests and reviews tires and why choosing the right ones for your car is so important. Play
Markets
Data as of 2:44pm ET
Data as of 5:22pm ET
Sponsored by
Sponsors
Sections