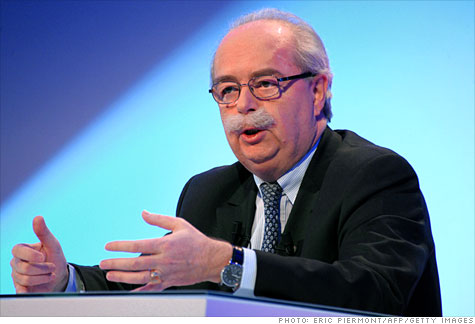 FORTUNE -- As CEO of Total, the French oil giant that is the world's fifth largest publicly traded oil and gas company, Christophe de Margerie reigns an empire with operations in 130 countries -- including some of the most politically sensitive ones, like Myanmar and Sudan -- and nearly 100,000 employees. Their boss is known for his colorful comments and straight-talking manner, but lately he's taken a more somber tone.

De Margerie sat down with Fortune during the International Economic Forum of the Americas' Conference of Montreal on June 7 to discuss the Gulf Coast oil spill and what the future holds for his industry.

As CEO of one of the world's largest oil companies, what are your thoughts on the Gulf spill?

We always knew this could happen and it did. But knowing that it might happen does not mean that it will necessarily happen insofar as we do all we have to do to prevent it. BP (BP) is the number one company in the Gulf of Mexico. It's not Shell. It's not Exxon (XOM, Fortune 500). It's not Chevron (CVX, Fortune 500). It's not Total (TOT). It's BP. BP is number one. So if there is one company who is experienced with the Gulf of Mexico, it's a little bit frightening for the rest. But the first thing we need to do is stop it. And treat it. And then we can talk about who is responsible.

Is deep water exploration too risky?

When you [start an] exploration, you don't know if you will be capable to develop it, or even to drill. But in advance, you take a good look, and you think of how you will be doing it, and you believe in your capacities to develop new technologies and new ways of making things for the benefit of all of us. But the only way is always to go one step further. If you cannot say that you have the capabilities to manage and to control it, don't do it. And that is the [difference between] taking a risk, by which I mean being courageous, and being crazy. And we cannot be crazy. And I don't think the oil industry is crazy.

Now the big debate will be, are we going too far? Take Brazil, which everybody considers the best opportunity in the world. Everybody's pleased to see Brazil recover thanks to oil and gas discoveries [like the 2007 discovery of the Tupi oil field off the Brazilian coast]. But it's much deeper than the Gulf of Mexico.

The big debate will be why all of the systems in place [did not work]. If you make the development of new projects more difficult for good reason, I think we have to accept it. But you also have to accept that the result will be less production available. That's why my message with people responsible [for regulation], like politicians, prime ministers and presidents, is often to tell them don't always think that we are against you, that we are enemies and that we are just putting forward the interest of our shareholders. Just also know that we are in industries that have 50 years to see in front of them and not just the next elections. We have to make sure that we are still producing at the level you like.

What do you make of the efforts to contain the spill?

The word transparent is a beautiful word. But to be transparent doesn't mean to show everything. There is a difference. Seeing this flow of oil [on the webcam] in the deeper shore, every day, 24 hours a day... there is a limit of what you can show to people. I think that's too much. I don't see what it brings. Transparency is to help change things. Transparency is what happened and what are you going to do for that not to happen again. But just a flow of oil -- that's not transparency.

And it has been hurting BP, which is trying to do something. They could have said, okay, we have relief wells on the way, which is the only one solution sure to really kill the oil spill. Until then, they're doing their best. How much are they [capturing]? We don't know yet. But it's better than nothing. And each time they've failed on something, there's been [headlines] about how they failed again. No one would tell firemen trying to stop a fire they were failing because they couldn't control the fire. Why? Because they are not responsible for the fire. But with BP, because they are responsible, then they are failing. If they were not responsible, [people would say] they are doing their best.

Have you changed anything about Total's business or operations in response to this crisis?

It's something that is difficult to say, but you always, at the end, benefit from the mistakes of others. Which is not the case yet, because we don't know what happened. But the first thing we decided is to review all of our exploration operations and systems just to be sure that we are following the last best [practices] for drilling.

And the second thing is that we have decided to create two new task forces: One for drilling and exploration wells, just to make sure that we have the best new policies and practices everywhere in the world. The second is a task force to strengthen preparation plans to fight any potential major pollution, i.e. what do we do if confronted with a spill like this? Even if I insist most of our job is how to avoid spills, how can we handle it in a way that is safer? It shouldn't happen, but that doesn't mean you don't have a solution to stop it.

Oil is a complicated business. Do you ever wish you were in a simpler business, like making t-shirts?

We have issues. Some others have issues. And frankly, I don't know if our issues are worse or not. I still believe if you take it as a responsibility, we have a chance to play a major role in this world. Because energy is life. Energy is growth. And people can say whatever they want about exporting renewables and [being] green and greener than green. In the end, it's what it is. And if [people] don't want to listen they will pay for it.

The risk is that in making our life more difficult is that the price to pay would be paid by you. Which means us. And not by the companies, but by people faced with less oil and higher prices. And then in that case, we would be really responsible. The easiest thing is to say we will do nothing, and until further notice we will stay on the side of the road. Which is an option. But it's not a good one.