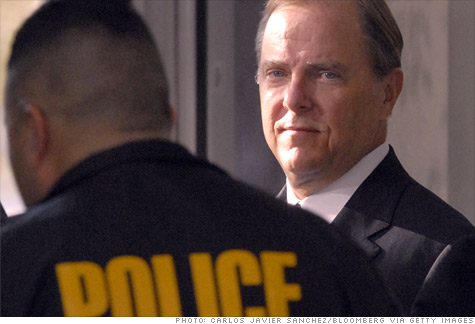 FORTUNE -- When Jeff Skilling, the former Enron CEO, was convicted on 19 counts, the headline of the Houston Chronicle read "Guilty! Guilty!" Sentenced to 24-plus years in prison, Skilling had been a wealthy executive who went too far in pursuit of profit and caused financial pain and devastation to thousands of investors, employees, and contractors with his decisions at the helm of Enron. Few if any in the media or public rose to his defense or mourned his imprisonment.

Those wounds from Enron's devastating collapse may soon be reopened. Sometime this month the Supreme Court will decide whether Skilling failed to receive a fair trial because of possible errors in jury selection. The court will also issue a ruling on the constitutionality of the backbone of the prosecution's arguments, centered on the "honest services" statute, which makes it a crime for public officials and business executives not to act in the best interests of their constituents or employers.

It's easy to imagine the outrage that could be stoked by his release or a retrial, especially in light of all the corporate misdeeds of recent years. What's not easy to know is what Skilling himself thinks about his current predicament.

Which is why I decided to ask him about it.

Two years ago I drove to the Federal Correctional Institution in Waseca, Minn., to meet Skilling. I hadn't met him prior to my visit. I simply wanted to talk with the vilified human being who was held responsible for one of the biggest bankruptcies and corporate scandals in history.

At the time, I had just left a senior executive position for a major company in the health-care industry. Enron's unraveling intrigued me, not only because of its historical significance, but because descriptions of the company's business environment seemed strikingly similar to UnitedHealth Group (UNH, Fortune 500), where I had worked for 11 years.

Both companies had been thought of as bold, innovative, and unafraid to redefine the status quo in their respective industries. Enron CEO Ken Lay's visionary leadership reminded me of Bill McGuire, former CEO and chairman of UnitedHealth.

Lay's successor, Jeff Skilling, had qualities of intensity, management discipline, and financial focus that were strikingly similar to Stephen Hemsley, then president and chief operating officer of UHG. And both companies had deep relationships with Arthur Andersen, the accounting firm that would be brought down in part because of Enron's scandals. I greatly admired United, and in my time there I never witnessed a reason to worry about the company's ethics or business practices.

In March 2006, in the midst of Lay and Skilling's four-month trial, UnitedHealth Group got embroiled in a stock option backdating case. I saw McGuire transformed from a respected health-care CEO into a pariah. He lost the professional respect he'd gained for growing United in value from about $400 million in 1989 to $70 billion in 2006.

Since Skilling was incarcerated a mere 90 minutes from my home, I wrote him a letter to request a meeting. I simply wanted to hear his story, and I wanted him to be able to tell it to me without judgment, in the hopes I could better understand what had transpired at United.

On May 10, 2008, I met with Skilling for four hours and was allowed no means of recording or taking notes. We sat in flimsy white plastic chairs in an open cafeteria-like setting. The room was filled with clusters of inmates and their Saturday visitors.

Dressed in his jailhouse khakis, Jeff was a bit thinner than in his old pictures, but looked physically healthy. Initially he was subdued, pausing before responding to simple questions, as if needing time to process things.

Eventually Skilling opened up. He didn't hesitate to talk about Enron and didn't dodge any of my questions. When I asked about the use of mark-to-market accounting to inflate revenue, he said, "Archelle, let me first explain the basics about how energy is traded." Then he discussed the company's rationale with the clarity of a business school professor.

I saw Skilling become agitated as he described CFO Andy Fastow's criminal actions relative to the "special-purpose entities" that Enron had used to hide its losses. But later, when I asked him whether he was angry with Fastow for cooperating with federal authorities, he just shook his head and -- in his words -- said he understood why certain people compromised their integrity. To him, Fastow's testimony to investigators was simply a way for Fastow and others like him to protect themselves and their families. Skilling's anger shifted in focus, from Fastow to the U.S. government, for what he claims was "prosecutorial abuse."

Ninety minutes into our meeting, Skilling lowered his eyes to the floor. "I apologize for asking," he said, embarrassment in his voice. "Could you buy me a cup of coffee? Inmates aren't allowed to touch money or approach the machines. They could put me in solitary for a week."

As I got his French-vanilla latte and recovered from astonishment that a man who had led a $110 billion company was not allowed to handle two quarters, I took the opportunity to get more personal, asking, "What is life like in jail? What is the scariest part of being here?"

Over the previous 17 months, Skilling said, he had adapted to prison life. "You don't want to get sick in here," he said, as he talked about practicing yoga, walking four miles a day, and avoiding carbohydrate-heavy meals to stay fit.

Skilling pointed out several inmates in the cafeteria he had befriended, but did not hesitate to admit to how lonely he was. His sister, Sue, lived in Minnesota and visited regularly; the rest of the family was out of state. It was unclear whether his 2002 marriage to Rebecca Carter would survive, since she and Skilling had never experienced married life together without the looming stress of the Enron collapse.

His two oldest children, Kristin and Jeffrey, had recently made their first visit to Waseca, but J.T., his youngest son, didn't feel emotionally prepared to see his dad in jail. Skilling told me his greatest fear regarding a 24-year sentence was missing the opportunity to support his children as they navigated into adulthood.

As quickly as Skilling had become quiet, he shifted back into CEO mode after I asked, "Jeff, you didn't have a good outcome. Looking back, how would you have altered your legal strategy?" His McKinsey-instilled strategic responses sounded like a PowerPoint slide deck for business executives facing down allegations of white-collar crime:

Contrary to his attorneys' advice, Jeff Skilling did not exercise his Fifth Amendment rights. He wanted to explain Enron's business decisions and couldn't bear the thought of being silent. Skilling said that he didn't regret testifying, but that he "talked too much and educated the prosecution on issues that they would otherwise have had to figure out on their own." In other words, Skilling now sees that testifying may have hurt his chances for an acquittal, but he thought it was a risk worth taking to be able to speak openly about what happened. In retrospect, it wasn't.

During the four years leading up to the trial, Skilling was visible in Congress and in the courtroom, but as a discredited CEO, he wasn't focused on his standing in the public's eyes. Looking back, he regrets not maintaining relationships with key industry advocates in and outside the media. In addition, Skilling wished he had developed a media strategy to influence public opinion and worked to change the reputation of himself and his firm -- something he now believes could have had a positive influence on the outcome of his case.

In May 2001, Skilling famously said, "They're onto us" to a group of Enron executives about a negative analyst report on the company. Five years later he was defending himself by claiming that his comment was sarcasm, not an admission of guilt. Skilling nervously chuckled as he recalled when he was publicly edgy and impatient during the episode, but he quickly got serious and seemed self-reflective when he said, "Sarcasm is easily misinterpreted and can be a tremendous liability."

Skilling was surprisingly self-analytical as he outlined his missteps. Then he shifted his focus once again, telling me about his appeal, filed in the Fifth Circuit Court of Appeals in April 2008. "We're investigating 'honest services,'" he said, explaining that several other Enron-related cases had been overturned based on interpretations of this statute later found to be incorrect.

He talked about spending hours reviewing legal documents and sounded optimistic but then said quietly, "If this doesn't work, I am going to be in here for a long time. You can visit if you want. It's nice to have someone new to talk to." Skilling was moved to Englewood, Colorado later that year, since the Minnesota facility I met him at was to be converted into a women's prison. I have not seen him since. Little did he know that two years later his case would be on the Supreme Court docket. The court will decide whether Skilling gets a new trial as soon as today.

Regardless of the outcome of the appeal, I got to know the Jeff Skilling who is a father, a husband, and an intelligent, driven business executive who decided he'd rather go to jail than not give voice to his side of the Enron tragedy. Was he arrogant? Yes. But that's not a surprise. After all, arrogance springs from the same well of confidence that led him to the big chair at Enron. And if things go his way in the Supreme Court, that arrogance may yet set him free.

-- Dr. Archelle Georgiou is the president of Georgiou Consulting, a health-care consulting firm based in Minneapolis. She was a senior executive in UnitedHealth Group from 1995 to 2007.