What can BP afford to pay? Nobody's sure. 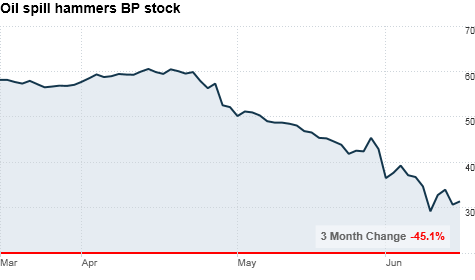 NEW YORK (CNNMoney.com) -- In the days immediately after oil began leaking from a well deep below the surface of the Gulf of Mexico, few expected the spill could cripple one of one the biggest energy companies in the world.

Now, nearly two months after what has become the worst oil spill in US history, the outlook for BP is unclear and investors are bracing for the worst.

Shares of the giant oil company have plunged 48% since the April 20 explosion on the Deepwater Horizon, erasing nearly $90 billion of BP's market value.

Investors have been rattled by pressure on BP from Washington to suspend or reduce its dividend payment, which totaled $10.5 billion last year. There is also growing speculation that BP could be taken over by a rival or end up in bankruptcy court because of the spill.

But beyond political pressure and takeover talk, investors have been grappling with the fact that the ultimate price BP will have to pay for the spill remains unknown, making it difficult to gauge whether the company can survive the crisis.

Frank Abella, president of Investment Partners Group, an asset management firm in Metuchen, N.J., said his firm sold all of its BP shares immediately after it became clear that the amount of oil leaking from the well was more than initial estimates had suggested.

"We sold within days of that and we haven't looked back," he said.

Abella acknowledged that, aside from the spill, BP's business is "humming along quite well." But he questioned whether the company's healthy cash flow would be "sufficiently large enough to withstand the pressures from all these hidden or contingent liabilities that are out there."

Despite the market's vote of no confidence, there are some Wall Street analysts who think that the outlook for BP is not as bleak as it seems.

Their argument is based largely on the idea that the amount of cash BP brings in from other parts of its business will be enough to offset any costs tied to the spill.

Alex Morris, an analyst at Raymond James, said he expects BP to generate $35 billion in cash this year. Even if the company pays its $10.5 billion annual dividend, and goes ahead with plans to spend $19 billion in capital expenditures, it will still have $5 billion left over to pay for the spill, he said.

If the costs exceed $5 billion this year, BP could sell some of its assets to raise more cash. But that isn't likely, according to Morris.

"To be honest, under no circumstances could I see that happening," he said. "Even if the numbers get monstrously huge, the company still has the wherewithal to survive this," he said.

BP: Where the liability ends

In addition, BP could borrow up to $17 billion and still be within its targeted debt versus capital range of 20% to 30%, according to analysts at GimmeCredit, a research firm focused on corporate bonds.

Philip Adams, an analyst at GimmeCredit, said in a research report Tuesday that BP's strong balance sheet should allow it to deal with "the ultimate liability" related to the spill.

Nonetheless, concerns about BP's ability to make good on its obligations were highlighted Tuesday after Fitch downgraded the company's debt to BBB, which is still investment grade.

The ratings agency cited a recent increase in the estimated flow of oil coming from the well and heightened political rhetoric.

Adams said BP should have no trouble raising the $20 billion that U.S. lawmakers have called on the company to set aside in an independently managed account to cover the costs of the spill.

Still, it remains incredibly unclear just how much BP will have to pay to settle all the claims against it.

Fadel Gheit, an analyst at Oppenhimer, said the liabilities could be enough to "bankrupt most companies," though he thinks BP has the financial capacity to absorb the costs.

Simmons & Company, a Texas-based investment bank focused on the oil and gas industry, estimates that investors are currently pricing in about $64 billion worth of liabilities related to the spill.

That's higher than what the firm expects under its most optimistic forecast of between $11 billion and $56 billion in liabilities.

However, the Simmons analysts acknowledged that liability costs could exceed $100 billion if BP is found guilty of criminal negligence.

While Simmons & Co. analysts think it's unlikely that BP will be forced to file bankruptcy, the company's founder and chairman emeritus, Matt Simmons, has said publicly that he expects the company to file for Chapter 11 protection soon.

In an interview with Fortune earlier this month, Simmons said BP has "about a month" before it runs out of cash from lawsuits, cleanup and other expenses.

"There isn't enough money in the world to clean up the Gulf of Mexico," he said.